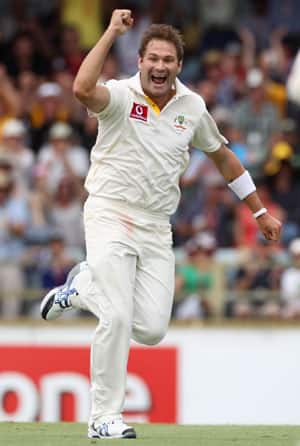 “We’re without James (Pattinson) but we get Ryan Harris back, who is as good a fast bowler as I’ve played with throughout my career. He’s had a lot of success. I’m confident that whether we go with three quicks in our attack or four, we can do a really good job,” said Clarke.

“Obviously these conditions will help the fast bowlers a lot, especially on day one.”

Clarke said it is not easy being a fast bowler but Harris has shown that when fully fit he is a major weapon in Australia’s arsenal.

“Being a fast bowler is tougher than being a batsman on your body, the actual workload and the pressure that goes through your body when you’re bowling. Rhyno bowls high 140kph and runs in hard. He is like any fast bowler, we would love to see him get some momentum and play for a long period of time, but like all the guys you need to take it one game at a time,” he said.

“I would love to see Rhyno play every Test match now to the end of his career, but who knows how long it’s going to go for? But he is in a really good place, he is fit and strong, he’s bowling as god as I’ve seen in the nets,” he said.

Clarke, who will use the same unsponsored bat with which he scored a triple century in Sydney for this Test, said he preferred to bat on the faster Perth wicket than at the SCG.

“I prefer the pace to be honest. I think I have my most success in Australian on wickets like the Gabba and here in Perth,” said Clarke.

“I like the ball coming on. For smaller guys like myself it means you don’t have to try and hit the ball too hard, you can use the pace to your advantage. And (fast pitches are) probably the best conditions to face spin on, because the ball bounces a lot more and you can hit through the line,” he said. (IANS)

Pakistan require hard taskmaster to get the best out of players: PCB chief

David Warner could be named Australia captain for T20s against India