Clarke confirmed that national selectors have effectively called time on the career of Haddin.

Birmingham: Australia Test skipper Michael Clarke on Tuesday confirmed that his national selectors have effectively called time on the career of veteran wicketkeeper and former vice-captain Brad Haddin. Clarke revealed that selection committee chairman Rod Marsh and his fellow panel member and Australia coach Darren Lehmann had spoken with Haddin during the recent tour match in Derbyshire and explained to him that they planned to hand the third Test ‘keeping duties to Peter Neville. ALSO READ: Ashes 2015 England vs Australia 3rd Test Preview

Haddin, who withdrew from the second Test at Lord’s for family reasons thereby allowing Neville to make his debut, did not take the gloves in Derby and has been conspicuous by his limited involvement in that match and subsequent training sessions at Edgbaston. ALSO READ: Peter Nevill chosen ahead of Brad Haddin as wicketkeeper for tour match

“Rod and Boof (Lehmann) came and spoke to me and told me what they were thinking. It’s obviously a lot harder for me because I have that attachment to Hadds. I’ve grown up playing cricket with him, we’ve spent a lot of time together and I love the fact that he’s still here working hard. If an opportunity comes, he’ll grab that with both hands,” Clarke was quoted as saying by cricket.com.au.

“He (Haddin) still wants to play that’s for sure and he has a great relationship with Neville. He sees his role over the last couple of days leading up to this Test is to help Nev as much as possible and they are really good friends so there’s certainly no lack of respect there. Hadds will certainly wish Nev all the best and hope he does well, and if there’s an injury or there’s another opportunity then I know he’ll be ready.” READ: Darren Lehmann satisfied with proceedings following Australia’s 2nd Ashes 2015 Test win at Lord’s

Haddin’s knocks were crucial in the 5-0 Ashes whitewash 18 months ago when he repeatedly came to the rescue of Australia’s brittle top-order. However, his form has dwindled since then with a solitary half century and 259 runs from 12 Tests at an average of 15.23. On the other hand, Neville has scored 45 runs in the one Test innings he has got so far. 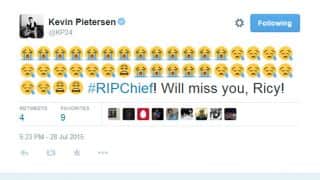