Clarke said that he hopes it would be easier for them to adapt to conditions in South Africa.

Australian Test captain Michael Clarke is reportedly anticipating familiar conditions at the Centurion Park on where the first Test with South Africa will be held.

Australia has always found a way of dominating in new South Africa and Clarke must do the same again with a revamped side that will include debutant Alex Doolan batting at number three when the first Test begins in Pretoria According to Telegraph.com.au, Australia has never lost a Test series in post-apartheid South Africa on six tours despite the current number one side leading over every other nation and Clarke believes that similar conditions have much lot to do with Australia”s success.

Stating that the wickets in the African nation generally have pace and bounce, like the Gabba and WACA in Australia, Clarke said that as Australian players are brought up on fast, bouncy wickets so they hope to adapt a lot quicker in South Africa as compared to India, where the ball stays low and spins a lot more.

Clarke further said that he hopes it would be easier for them to adapt to conditions in South Africa, although he admitted that the hosts would always have a home-ground advantage.

Australian bowling coach Craig McDermott also believes the Centurion Park pitch, where South Africa have won 17 of 18 Tests, will be similar to the Gabba, saying that the weather forecast is supposed to be hotter and clearer so the wicket will dry out a lot.

In 37 home series Tests since readmission to international cricket two decades ago, South Africa has won an imposing 27, drawn five and lost just five, but four of those losses have been against Australia, along with two draws, the report added. 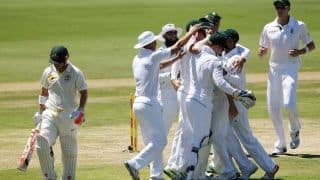