Mitchell Johnson snared 12 wickets in the Test at Centurion.

South Africa entered their Test series against Australia as undisputed world champions in the five-day form of the game.

But the crushing nature of their 281-run defeat in the first Test at SuperSport Park has raised the possibility that their era of dominance may be coming to an end.

Irrespective of the result of the current three-Test series, South Africa will remain on top of the International Cricket Council (ICC)  rankings — but they will need to raise their game in order to be regarded as champions in more than name only.

Left-arm fast bowler Mitchell Johnson was the destroyer with match figures of 12 for 127.

Johnson not only blasted through South Africa’s top order batting in both innings, he intimidated the hosts with fast, hostile short-pitched bowling. Hashim Amla and Ryan McLaren both took sickening blows on their helmets.

Australian captain Michael Clarke had no doubt that it was a performance that would have been noticed around the world.

“I don’t know what South Africa are feeling at the moment,” said Clarke.

“I do know there is not one cricket lover around the world that doesn’t know that Mitchell Johnson is bowling at extreme pace and executing his skills better than any other bowler in the world.”

But Clarke was wary of claiming that his team had dominance in the series.

He insisted that South Africa had been tough opponents at Centurion — although there was not much evidence to back up his view — and said he expected Smith’s team to come out fighting in the second Test which starts in Port Elizabeth on Thursday.

“I said when we left Australia that the greatest challenge this team faces is to have success away from home,” said Clarke.

“That’s why this series is such a big challenge for us. We started well but we’ve got a lot of work to do.

“There’s a lot of skill in that [South African] change room. I’m sure this next Test is going to be even tougher than what we just faced.”

“There’s going to be a lot of criticism and fan emotion,” he said. “We didn’t live up to expectations and we deserve every bit that comes our way.”

Smith and fellow opening batsman Alviro Petersen both fell cheaply to Johnson in both innings, exposing the rest of a batting line-up which is without the recently retired, Jacques Kallis.

Only AB de Villiers, who made 91 and 48, looked comfortable for extended periods against Johnson, although Amla played some good strokes in making 35 in the second innings.

But it was not only South Africa’s batting that failed.

The bowling was disappointing, with Dale Steyn, Morne Morkel and Vernon Philander failing to take advantage of a pitch which Clarke described as ‘quite nasty’, while De Villiers said some of South Africa’s fielding was ‘almost embarrassing’.

There are not many options for the South African selectors, although left-armer Wayne Parnell might replace fellow all-rounder Ryan McLaren.

Petersen looked out of his depth against Johnson but there are no obvious replacements.

Australia, meanwhile, are looking ahead.

“They know we’re here to play,” said coach Darren Lehmann. “But this game is finished. We need to adapt for the next game. It is a case of backing it up.”

“I doubt there is much mental scarring,” he said. “We’ve lost a game and we’ve been beaten comprehensively.

“It’s important that we move away now. There are still two big Test matches left in this series and we need to make sure that we perform really well in the next one.” 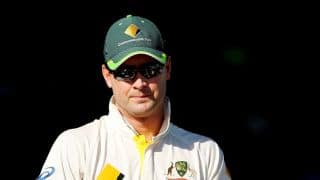