Michael Clarke in Australian side for 2nd ODI vs India at Brisbane!

Michael Clarke in Australian side for 2nd ODI vs India at Brisbane!

But as it turned out, there was no dramatic comeback for the talismanic batsman, who quit the game last year.

Brisbane: Fans trouping in for the second India-Australia cricket one-dayer were in for a surprise when retired former captain Michael Clarke‘s name showed up at the top of the home team’s line-up on the Gabba’s giant scoreboard. As it turned out, there was no dramatic comeback for the talismanic batsman, who quit the game last year, and the display of his name was just an error which was soon rectified. “Never say never.. Hahaha. Love the GABBA,” tweeted Clarke after the scoreboard’s picture with his name at the top of the Australian line-up was posted on social media. The 34-year-old bid adieu to his international career last year after a string of poor results. FULL CRICKET SCORECARD: India vs Australia 2015-16, 2nd ODI at Brisbane

Meanwhile, in-form opener Rohit Sharma slammed his second successive century to help India post a challenging 308 for eight against an Australian attack that lacked bite in the second cricket ODI. Electing to bat at the GABBA, the visitors lost opener Shikhar Dhawan early (6) but a 125-run second-wicket partnership between Rohit (124) and Virat Kohli (59) ensured that the Men in Blue build a solid base. ALSO READ: Rohit Sharma’s controversial reprieve during India vs Austraila 2nd ODI at Gabba reopens DRS debate

Things were going along fine when Kohli was dismissed against the run of play. He went for a quick double even as Rohit tried to send him back, but he went ahead for the second run nevertheless and was run-out in the 24th over as Kane Richardson’s throw from square leg found him short. Rohit carried on in the same vein, stitching a 121-run third-wicket stand with Ajinkya Rahane (89).

Rohit, who had blasted 171 in a losing cause at Perth, smashed 11 fours and three sixes during his 127-ball stay at the crease. Rohit, who registered his 10th ODI hundred, though was unlucky to be run out after his partner’s drive caught the finger of James Faulkner to hit the stumps at the non-strikers end. 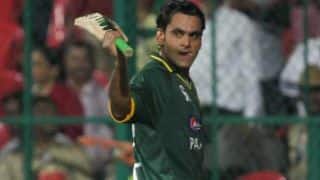