Clarke denies the players would be treating it as a try-out for the World Cup.

Captain Michael Clarke on Wednesday insisted Australia’s visit to Zimbabwe was not a “token tour” or World Cup audition but was all about winning as players return to international action.

A 14-man squad departed Wednesday for Harare to play a two-week series that also involves South Africa — Australia’s first international commitment since the ICC World T20 in Bangladesh more than four months ago.

“I think it will be a tough series. It’s not a token tour, it’s about winning,” said Clarke. Several key players are absent, including injured all-rounder Shane Watson, fast bowler Ryan Harris and father-to-be David Warner.

This has opened the door for the likes of Phil Hughes, Mitch Marsh, Ben Cutting and Kane Richardson to stake their claim to a regular first-team place. Clarke said he expected them all to make the most of their chance and put pressure on the players not travelling.

“Obviously it is unfortunate that we have a few injuries, but it’s exciting for people like Mitch Marsh; Phil Hughes gets an opportunity, as does Kane Richardson and Ben Cutting,” he said.

“It’s a good chance for them to grab their opportunity. The reason you train so hard and perform so well in first-class cricket is to represent Australia, so when you get a chance you have to make the most of it.”

But Clarke also denied the players would be treating it as a try-out for the World Cup, to be hosted by Australia and New Zealand in February-March next year. “I think they’ll be seeing it as an opportunity to be part of our one-day team, to try and get their foot in the door, cement their spot and make it hard for the players that aren’t on this tour to get back into the team,” he said.

“That’s how I’d like them to see it. Unfortunately there’s only 11 spots and we’ve probably got 20 players, in my opinion, that are ready to be a part of that 11. So now it comes down to consistent performance. But I’m certainly not there to give guys an opportunity — I’m there to win.”

The series marks the start of a gruelling schedule for Australia. Following Zimbabwe, they play Pakistan in the United Arab Emirates and then host South Africa, England and India in limited-overs fixtures plus Tests before the 2015 World Cup.

After that, they head to the West Indies before the 2015 Ashes series and then a series in Bangladesh. New Zealand, the West Indies and India are scheduled to tour Australia during the southern-hemisphere summer of 2015-16. Despite the long international lay-off, Clarke said all the players looked “in pretty good shape”. “I’m confident we will be right come the first game,” he said. Australia’s first match of the six-game round-robin series is against Zimbabwe on August 25. 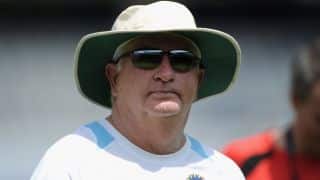 Will Duncan Fletcher exit, or will he hang on and risk getting sacked?