Sydney Sixers boss and former Australian paceman Stuart Clark is keen to have Michael Clarke in his side and says his presence would provide Big Bash a credibility boost. 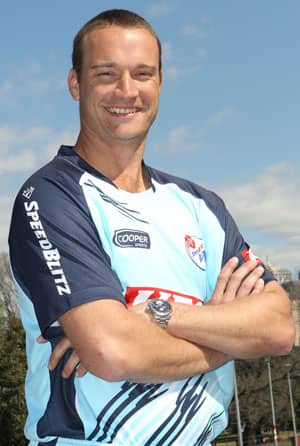 Sydney Sixers boss and former Australian paceman Stuart Clark is keen to have Michael Clarke in his side and says his presence would provide Big Bash a credibility boost.

“I think he was torn being playing it this year and taking on the new job. He chose to take on the new job but I hope in the future there is an opportunity for Michael to play somewhere down the line,” Clark said.

“I think to have Michael would be another boost for a competition that’s doing well with TV ratings and everything like that. It’s just another factor that would make sense.”

Clark said although Michael Clarke is not a bang-bang player, most suited for the Twenty20 format, but still he would prove to be useful hand.

“He’s not your clear-the-boundary type player. He’s your middle-order, rotate the strike, run hard between the wickets, pick up two a ball if possible player. He’s never going to be your power-hitter to smash it out of the ground but he’s still a very valuable commodity,” Clark was quoted as saying by The Age.

Clarke’s stature grew in the country after leading Australia to two comprehensive victories against India in the first two Test and scoring a magnificent triple ton in the process.

The Australian skipper has retired from International Twenty20 but is keen to play in leagues such as Big Bash and IPL.

“I’ve enjoyed watching it to be honest. I think the Champions League and the IPL are wonderful.” (PTI)

Australia will not push for James Pattinson's comeback: Pat Howard