Australia captain Michael Clarke scored his first century of the tour to leave the visitors well-placed at stumps on the third day of four against Worcestershire in their final Ashes warm-up match at New Road on Thursday. 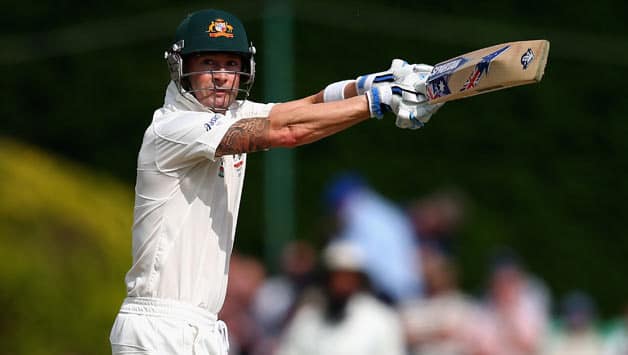 Australia captain Michael Clarke scored his first century of the tour to leave the visitors well-placed at stumps on the third day of four against Worcestershire in their final Ashes warm-up match at New Road on Thursday.

Clarke, who had been suffering from a recurrence of his longstanding back injury during the early stages of the tour, got in touch for next week’s first Test against England at Trent Bridge by making 124 off just 98 balls.

His innings featured 16 fours and three sixes, although a placid pitch and a less than threatening attack certainly worked in the star batsman’s favour.

Australia set Worcestershire 457 to win, with the hosts 64 for one at stumps – a deficit of 393 after Nick Compton, who on Wednesday revealed his unhappiness at being dropped by England, the man out.

Earlier, Australia declared for the second time in the match after piling up 344 for five, with Phil Hughes making 86.

Hughes, who shared a 132-run stand with his captain, said: “I think it’s a real good statement. Michael had been out of the game for three months and to play well last week then go on today to three figures is outstanding.”

“He pushed the game forward and he hasn’t been complaining about his back one bit, which is pleasing for him and for us as a unit.”

“I thought he looked very good, he was running between the wickets well and he was swinging hard towards the end so that’ll loosen his back up nicely. He’s coming along really well.”

When Australia batted the second time, Ed Cowan, still not certain of a Test place, was lbw to Jack Shantry for 34.

Clarke then took over, striking his third ball for four and making Worcestershire pay for Alexei Kervezee dropping him on 32 before he was eventually caught at third man off Shantry.