Pat Cummins made debut under the captainship of Michael Clarke in November 2011 at Johannesburg.

Pat Cummins made debut under Michael Clarke in November 2011 at Johannesburg. Cummins was very impressive on debut as he picked up 6 for 79 in the second innings. He has been in and out of the squad sue to injuries, however he performed brilliantly in the 2017-18 Ashes taking 23 wickets. He has impressed the selectors with his skills with the ball and bat and will surely be a player to watch out for in the on going Australia‘s tour of South Africa.

“His debut was fantastic, everything we are seeing now in regards to his talent with bat, ball and in the field we saw on debut.” Clarke told News Ltd. “He is such a talent and someone I believe can go on and captain Australia one day. He’s a great athlete and someone I always wanted in the XI in all formats when he was fit.”

Australia won the Three day warm up match against South Africa A. Cummins took 4 for 32 and was the top scorer with bat with 59* in the first innings. 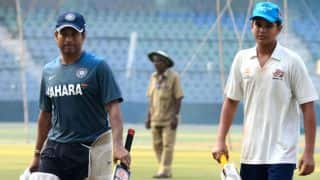