Australia captain Michael Clarke said his team's batsmen were to blame for the team's collapse to 47 all out in their second innings on a frenetic second day of the first Test against South Africa at Newlands on Thursday. 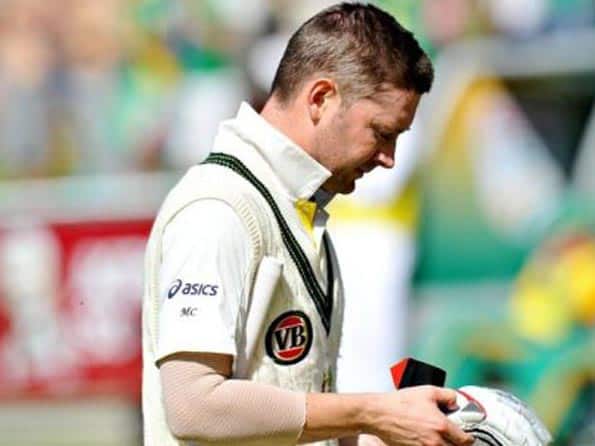 Australia captain Michael Clarke said his team’s batsmen were to blame for the team’s collapse to 47 all out in their second innings on a frenetic second day of the first Test against South Africa at Newlands on Thursday.

Twenty-three wickets fell for 294 runs on a day which ended with South Africa on 81 for one, 155 runs short of victory with nine wickets standing.

“The top seven as a batting unit need to take full responsibility for what occurred,” said Clarke.

“It’s not good enough and me as the leader, coming off a good first innings total, need to take the blame.

“Our shot selection was horrible and South Africa bowled well, but we shouldn’t have been all out for 47.”

Australia’s extraordinary collapse came after they had seemed to be in a dominant position after bowling South Africa out for 96 to take a first innings lead of 188.

“I’ve never had a day like this in my career and I hope I never will again,” said Clarke, whose day started brightly enough as he took his first innings score from 107 to 151 before he was last man out, with Australia’s last two wickets adding 70 runs in a respectable total of 284. It got even better for the Australian skipper.

Shane Watson took five wickets in 20 balls as South Africa were shot out for 96, losing their last nine wickets for 47 runs in 11.3 overs. Watson finished with five for 17, while Ryan Harris took four for 33.

But Watson was out to Dale Steyn’s third ball when he opened the batting in the second innings and Australia collapsed to 21 for nine.

Australia had last wicket pair Peter Siddle and Nathan Lyon to thank for avoiding being dismissed for less than the world record low of 26, by New Zealand against England in Auckland in 1954/55. Siddle (12 not out) and Lyon (14) put on 26 for the last wicket, more than doubling their team’s total and taking them past the world record and Australia’s all-time low, 36 against England at Birmingham in 1902.

New cap Vernon Philander took five for 15 on a pitch which offered plenty of seam movement and had more pace than on the first day but which, as Clarke admitted, was by no means unplayable.

“The wicket quickened up a little bit and they (the South African bowlers) executed well. We can’t blame the wicket,” said Clarke.

The day ended with South Africa captain Graeme Smith and Hashim Amla putting on an unbeaten 54 and batting with a freedom matched only by Clarke in the first innings to swing the odds back in the home team’s favour.

Clarke admitted Australia will need to produce another exceptional bowling performance on Friday to regain the advantage.

But he remained positive. “We’re a good chance to win this Test match.

As we’ve seen, things can change very quickly in this match.”

South African opening batsman Jacques Rudolph, playing in his first Test for five years, was the only man out in his team’s second innings.

“It must be some sort of record. I’ve finished my batting and my fielding within two days – and we had rain yesterday,” he said.

“It just quickened up a bit from yesterday and that induced most of the nicks. You’ve got to weigh it up. We scored at five runs an over. I thought we gained a lot of momentum in the last hour and a half, the way we played out there.”

Rudolph said that Smith had told the team at the close of play that they needed to go out on Thursday with a positive attitude and to be clinical in finishing off the match.

“In previous exchanges with Australia, especially in Australia, we’ve changed targets very well and I think the boys will take a lot of confidence from that,” added Rudolph.

It was a particularly busy day for television umpire Billy Bowden, who had to make nine reviews.

Three South African batsmen – Amla, Jacques Kallis and AB de Villiers – were given out on review after initially being given not out by the on-field umpires.

Shaun Marsh, who batted at number ten in Australia’s second innings because of a back injury, suffered a similar fate.

Four reviews were unsuccessful while Phil Hughes was given out after an umpire-requested review of a low catch by Rudolph at third slip. (AFP)