Michael Clarke defended the decision to play in the match and aggravating his hamstring injury.

Australia captain Michael Clarke termed his side’s performance against Zimbabwe as ‘terrible’, and said that he cannot sit and apologise to the country’s public and media for every loss. Australia suffered their only second loss to Zimbabwe in their history on Sunday when the hosts registered a narrow win in the ongoing Triangular Series 2014.

“It’s a terrible performance, there’s no doubt about it. Forget the opposition; I think we played some average cricket at best throughout the whole game. I think our general fielding was poor. Our execution with the ball was okay but it had to be better when we only had 200-odd on the board,” Clarke told Cricket Australia’s (CA) official website.

“And our batting, we continually talk about facing spin bowling as an Australian team. It seems to be an area we continue to struggle in and today’s another example of that,” the Australian captain added.

Clarke continued, “It’s the game of cricket. There’s areas of our game we need to improve – facing spin bowling is one of them, execution with the ball is another. I don’t think I have to sit in front of the Australian public and the media and apologise every time we lose. We go out there to win every game we play, and obviously we’re extremely disappointed.”

“I wish we had played better [but] we’ve got a couple of days to turn things around. I’m still confident boys can win this series, but we need to continue to improve our cricket in all facets of the game,” Clarke said.

Clarke defended the decision to play in the match and aggravating his hamstring injury, ahead of the series against Pakistan in the UAE. 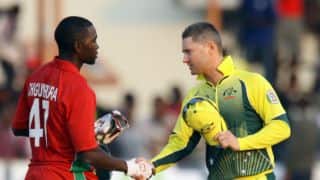