Mike Hussey made an impressive half-century 54 not out as Australia reached 267 for six at lunch on day two of the second Test against West Indies here on Monday. 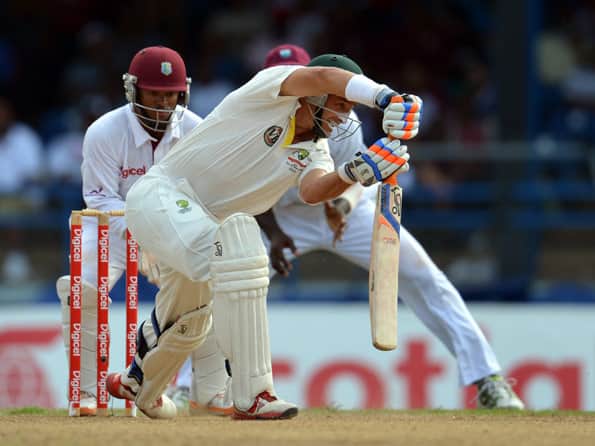 Mike Hussey made an impressive half-century 54 not out as Australia reached 267 for six at lunch on day two of the second Test against West Indies here on Monday.

Hussey was partnered by James Pattinson as the pair went to the break having added 59 valuable runs for the seventh wicket when a rain shower brought lunch forward by 10 minutes at the Queen’s Park Oval.

West Indies had decided to take the new ball at the start of the second day and seamer Kemar Roach seemed to enjoy having one with shine on it back in his hands.

His first delivery of the morning hit Matthew Wade on the pad but the ball was going down the leg side. The second was comprehensive.

Roach was coming around the wicket and the delivery was close enough to Wade for him to play at it but the ball took the edge and went to Darren Bravo at first slip. Australia were six down for their overnight score of 208.

Pattinson frustrated both Fidel Edwards and Roach by repeatedly playing and missing outside the off-stump as he struggled to settle.

He wasn’t helped when drizzle took the players off the field after 45 minutes of play with Australia 6-223.

Shortly after the 16 minute break, Hussey played a drive off Roach in the air just wide of cover.

Next over saw the introduction of spin for the first time in the day with the new ball just 10 overs old.

On the first day, Hussey had been put down by wicket-keeper Carlton Baugh when he had scored just five.

The gloveman gave him another life when Hussey, on 47, went down the wicket and the ball dipped and spun past the bat.

It reached Baugh at shoulder height. He fumbled the ball and by the time he had regathered Hussey had made it back into his crease.

A clean take and Hussey would have been gone as he was at least a metre down the pitch when the ball beat him. On each occasion Shane Shillingford was the unfortunate bowler.

Pattinson didn’t find it easy throughout the session and took a couple of blows to the body but was willing to tough it out.

Shortly before lunch Hussey brought up his fifty. He had had two lives but was again playing an important innings for the visitors and he had found a battling, supporting partner in Pattinson. (AFP)