Michael Hussey boosted Australia's first innings with another half-century after the loss of skipper Michael Clarke's wicket on the second day of the first Sri Lanka Test on Saturday. Michael Hussey boosted Australia’s first innings with another half-century after the loss of skipper Michael Clarke‘s wicket on the second day of the first Sri Lanka Test on Saturday.

Hussey’s productive summer showed no sign of waning as the 37-year-old shared in a unbroken 60-run stand with wicketkeeper Matthew Wade to push Australia’s total past 350 after a rain-delayed start to the day’s play.

At lunch, Australia were 364 for five with Hussey unbeaten on 66 and Wade not out 31.

Hussey, who scored two centuries in the recent series against South Africa, became the fourth half-century maker of the Australian innings, off 114 balls.

Following his 30th Test half-century, the reliable number six batsman has now amassed 784 runs for the calendar year. Wade had a life on 20 when he was dropped by fielding substitute Suraj Randiv at mid-wicket off Chanaka Welegedara nearing lunch.

Clarke was out in the day’s third over after a 50-minute rain delay when he edged Shaminda Eranga to Kumar Sangakkara low down at first slip.

The Australian skipper’s 74 off 145 balls took his tally to 1,432 runs this calendar year at 102.28 with a possibility of three more Test innings to come before year’s end.

It was a big wicket for Sri Lanka to remove Clarke. He had been on track for his fifth century of 2012, three of them double-centuries, along with his Test highest score of 329 not out against India in Sydney last January. 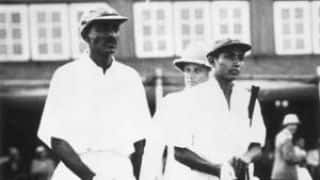