Hussey is yet to come to terms with the fact that many first choice players were axed from the 12-member squad to meet South Africa in the dead rubber at Adelaide.

Former Australian cricketer Michael Hussey, who was a pillar in the middle order from 2005 to 2013, was not impressed with the sweeping changes the Australian selectors made for the third and final Test against South Africa. The changes were made in the wake of team s dismal outing in the first two Tests at Perth and Hobart, which they lost along with the series. Hussey felt that players like Callum Ferguson and Joe Mennie were really unlucky to lose their spots after playing only a single Test. He is yet to come to terms with the fact that many first choice players were axed from the 12-member squad to meet South Africa in the dead rubber at Adelaide.

Interim Chairman of Selectors Trevor Hohns had named a 12-member squad for the 3rd Test, a day-night affair, dropping as many as six players from the original squad. Wow! I m in a bit of shock, Hussey told the Unplayable Podcast when he first heard the announcement. I can t believe there s been so many changes. The selectors have really wielded the axe. They ve not taken the two losses to South Africa very well and they ve cut quite a few players and picked a whole range of new guys, he added, reacting to the wholesale changes the selectors made after Australia s fifth successive defeat in Tests.

Though Captain Steven Smith, Coach Darren Lehmann and chief executive James were convinced of the changes, Hussey was adamant that the Aussie selectors needed to pick the best squad available for the final Test, regardless of age. The selection panel went with young blood with vice-captain David Warner (30) being the oldest in the squad. Hussey felt bad for the two players Ferguson and Mennie who were dropped from the squad only eight days after making their Test debuts.

I m not sure I would have gone for that many changes, personally, Hussey said. I m sure the selectors would have had a lot of discussion leading into these decisions and there s some really tough calls been made there. It s a very tough call on players like (Callum) Ferguson and (Joe) Mennie who were just given one opportunity. I thought Mennie (1-85) bowled quite well in the Test match in Hobart. He s well within his right to feel a little aggrieved. And (Callum) Ferguson, he s pretty unlucky. It was tough conditions for batting (in Hobart); he was run-out in the first innings and a pretty unlucky dismissal in the second innings. He s got to find himself a little bit unlucky to be given just one opportunity at Test match level and find himself back in Shield cricket, he added.

Matthew Renshaw replaced Joe Burns for the opener s slot while Peter Handscomb and Nic Maddinson replaced Ferguson and Adam Voges. Mathew Wade came in for Peter Nevill while Chadd Sayers and Jackson Bird came in as two pacers at Mennie s cost. Hussey also expressed happiness over the selection of Handscomb, who worked with him during his stint with Australia A earlier this year. Handscomb, what about the timing? Hussey said. With the Australian team battling a fair bit, to score a double-century against New South Wales in front of Steve Smith definitely got him over the line to get picked for Australia.

He is a very good young player and I know he s been identified for a period of time now. He s been the Australia A captain throughout the winter. I just really hope now that they ve given him an opportunity they stick with him for a while and give him a good opportunity to grow into the role and not cut him as well if he has a couple of ordinary Test matches in a row, Hussey concluded. 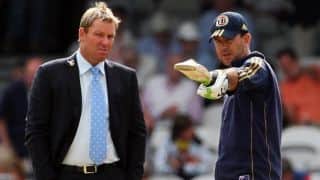 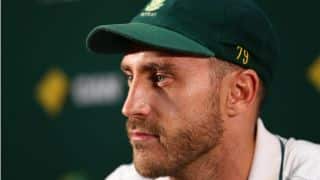