Michael Rippon confident to play for Cobras in CLT20

Michael Rippon confident to play for Cobras in CLT20

In a side filled with international players, Michael Rippon's place in Cape Cobras' playing eleven is not certain, but the young spinner said he is confident of atleast getting a game in the ongoing Champions League Twenty20 cricket tournament here. 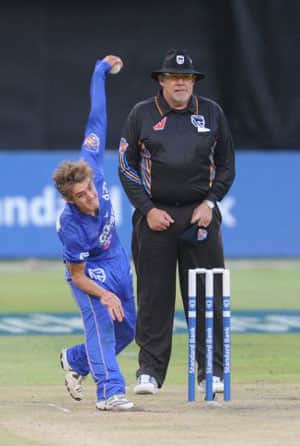 In a side filled with international players, Michael Rippon’s place in Cape Cobras’ playing eleven is not certain, but the young spinner said he is confident of atleast getting a game in the ongoing Champions League Twenty20 cricket tournament here.

Cobras got their CLT20 campaign off to a winning start with a seven-wicket win over 2009 champions New South Wales and will face defending champions Chennai Super Kings on Wednesday.

But to find a place in Cobras’ playing eleven, Rippon, who did not play in their tournament opener, has to thwart competition from more established spinners like Robin Peterson and Justin Ontong.

“Yeah, I hope (I get picked), obviously I want to get on to the field and have a game. But we have got quite a strong squad. We have quite a few national players back in the side. I think it’s all about combination. I don’t think you can play too many spinners, but I am sure I’ll get an opportunity,” Rippon told reporters today.

Asked if Chennai Super Kings, who lost to Mumbai Indians by three wickets in a thrilling contest on Saturday, are likely to wilt under pressure, he said, “It’s obviously a game of cricket and you have stuff like that happening. But as long as you have a secured game plan and follow it, you will be safe.”

Asked about the pitch on offer at the M A Chidambaram stadium here, the 20-year-old said, “It’s not as quick as it normally is. Players are saying it’s quite slow and quite sticky and it doesn’t come on to the bat.”

Rippon, who is a chinaman bowler, also said that senior colleague Robin Peterson has been helping him in his preparation.

“He’s quite experienced and has many years of international experience. Its nice to get feed from him and for him to give you information and help you out about tactics. It’s very nice to play alongside a player like him,” he said.

Asked if he had picked the brains of Paul Adams, the South Africa’s former chinaman bowler, he said, “I have spent a lot of time with Paul back in the Cape. He’s our spin coach at Western Province. I love to talk spin bowling with him because obviously he is a legend of the game. I’d be happy to follow in his footsteps.”

Rippon also refused to buy the theory that chinaman bowlers are vanishing from modern day cricket.

“I don’t think it is vanishing. There aren’t many chinaman bowlers at this level (anyway). There’s only me, Paul Adams, Dave Mohammed and Brad Hogg,” he said.

“Now-a-days, anybody taking up spin bowling is taught finger spin, as it is easier and with the format of Twenty20 you want to dart the ball in and stuff.

“It would be a very good option for four and five-day cricket. So, I hope there would be a better breed of chinaman bowlers in the future,” Rippon added. (PTI)

We are confident of beating India in India, says Andy Flower