London: Former England captain Michael Vaughan believes that maverick leg-spinner Adil Rashid should be given his Test debut on Tuesday as he can turn out be a productive player for the team in the second Test against West Indies in Grenada.

Yorkshire leg-spinner Rashid, who claimed 46 wickets last summer in his county’s Championship-winning campaign, is fighting for a spot in the playing XI for the Grenada Test alongside James Tredwell and Moeen Ali. Vaughan said that Rashid might bowl four spells in a day and two and a half of them might look utter rubbish, but insisted the leg-spinner should be picked as those spells could turn out to be the difference in the game, the BBC reported.

The former skipper argued that he doesn’t see when Rashid would ever be trusted in a Test match if England is not going to play him on a wicket like Grenada or Barbados next week. Vaughan added that the surface would suit Rashid’s bowling for England, who failed to bowl the hosts out in the first drawn Test in Antigua last week. England tour of West Indies 2015: Complete coverage 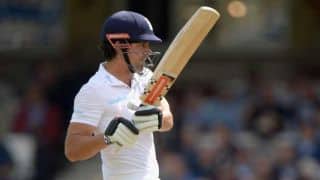