Michael Vaughan and Geoffrey Boycott both slammed the performance of England's batsmen following their embarrassing start to the Test series in New Zealand. 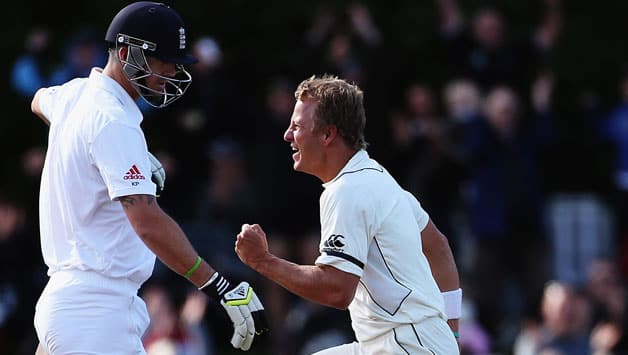 Michael Vaughan and Geoffrey Boycott both slammed the performance of England’s batsmen following their embarrassing start to the Test series in New Zealand.

Thursday saw the tourists collapse to just 167 all out in the first innings of the opening Test in Dunedin on a good batting pitch against a capable, if hardly stellar, New Zealand bowling attack.

England’s miserable batting display was then put into context by the hosts reaching 131 without loss on Thursday’s second day, the first day of match action after Wednesday’s total washout.

“England didn’t respect the game,” Vaughan told BBC radio’s Test Match Special programme. “They took the mickey out of Mr Cricket. England’s mindset has been over-confident; they weren’t prepared to do the hard yards.

“All England had to do was respect, do the basics and see off the new ball to lay the foundations,” added Vaughan, who captained England in 51 of his 82 Tests.

“We saw them do that in India [before Christmas] but the majority of the batting order — and it was the majority, not one or two — didn’t turn up.

England were bowled out in under two sessions, with several batsmen playing a key role in their own dismissal because of poor shots.

This was the fourth time in a row England had been dismissed for fewer than 200 runs in the first innings of the opening Test of a tour and they now appear unlikely to buck a trend that has seen them win the first Test of an overseas series just once — against perennial strugglers Bangladesh — in the last 13 attempts.

England were widely praised for playing several warm-up matches ahead of their triumphant Ashes series win in Australia in 2010/11 but in New Zealand they had just the one first-class match before the Tests — a three-wicket defeat by a New Zealand XI in Queenstown.

Boycott, renowned for his meticulous preparation in his playing days, said that simply wasn’t good enough.

“You need better preparation,” he said. “I hope someone tells managing director Hugh Morris, who is probably sleeping back in England, when he wakes up that we’re talking about the poor preparation.
“England were sloppy, careless, and I feel there’s almost a holiday atmosphere.”

This performance was part of a worrying England trend when it comes to the opening Test on each of their last four overseas tours, with the side skittled out for 192 by Pakistan in Dubai in January last year, 193 by Sri Lanka in Galle in March 2012 and 191 by India in Ahmedabad in November.

England's first-innings show against New Zealand 'one of the worst': Ian Botham