Vaughan pins blame on Cook for his bowling changes in the narrow loss to Australia.

Former England skipper Michael Vaughan urged Alastair Cook to rediscover his captaincy to guide England to victories in the matches ahead. Vaughan said that despite poor bowling from the pacers, Cook needs to take the responsibility for the bowling changes he made during the match.

The England bowlers were taken apart towards the end of the innings when James Faulkner scripted a sensational one-wicket win. “The skills of the England bowlers were not good enough, particularly in the last two or three overs. They did not bowl enough slow bouncers or yorkers outside off stump to protect the short leg-side boundary. They ended up bowling length balls to Faulkner and it was no wonder that they kept disappearing into the stands,” said Vaughan.

“Alastair will have asked himself whether he should have given Joe Root one more over and should he have told his bowlers to bowl fuller and wider outside off stump to restrict Faulkner’s options.

“He will ask himself how he did so many things right during the game yet got so many things wrong at the end and how England managed to lose a game inside the last 30 minutes,” he said.

From a possible scenario of leveling the series 1-1, England will head to Sydney for the third ODI under pressure to save the series. 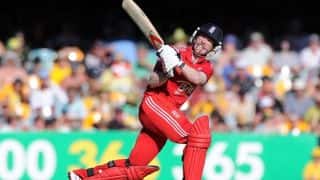