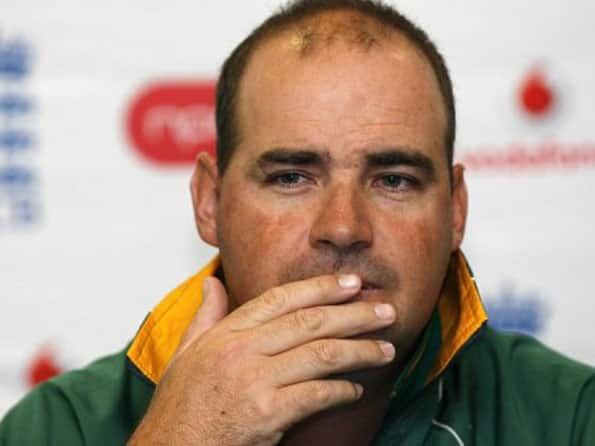 For his opening match in charge the 43-year-old South African, the first non-Australian to be handed the job, will be missing all-rounder Shane Watson and batsman Shaun Marsh for the December 1 showdown at the Gabba in Brisbane.

Also out with injury are pacemen Mitchell Johnson, Ryan Harris and youngster Pat Cummins. The team will be announced on Saturday.

Harris, who returned home early from the tour to South Africa, remains sidelined by pelvis trouble and Watson has a hamstring injury which he picked up in the second Test against South Africa in Johannesburg earlier this week.

Exciting teenage fast bowling discovery Cummins has a painful left heel and despite scans clearing him of serious injury, Cricket Australia said Friday he is unlikely to recover in time for Brisbane.

“We unfortunately suffered some injuries during the recent Test series against South Africa,” Cricket Australia general manager Pat Howard said in a statement.

“With such a short turnaround time between series, five players who were involved in the (South Africa) series will not fully recover in time to play the first Test against New Zealand.”

“Ryan Harris is recovering from the pelvis injury that kept him out of the second Test against South Africa,” Kountouris said.

“He is making good progress but has not returned to bowling as yet and is therefore unavailable to play the first Test against New Zealand.”

Kountouris said a decision on his return to training will be made early next week.

The team physio said Watson’s condition will also be reviewed next week.

Watson said he could not risk aggravating his hamstring.

“Even playing as a batsman I could still reinjure it, so it meant that it would really put my summer back in a big way if I did reinjure it,” Watson said.

Kountouris said he was hopeful Marsh will return to training next week and possibly could be available for selection for the second Hobart Test.

Cummins, 18, who was man-of-the-match in his debut Test in Johannesburg, is to be reviewed early next week to check on his progress from his heel injury, Kountouris said.(AFP)