Melbourne [Australia]: Australian all-rounder Hilton Cartwright has been roped in by Middlesex for the first few games of the English county season. The 26-year-old will replace his former Western Australian captain Adam Voges in Middlesex and is set to play the first five games of the County Championship, ESPNcricinfo reported.

Regarded as a player of promise in all three formats of the game by national selectors, Cartwright made his international debut for Australia during a Test against Pakistan in January last year before he played just his second match in the longest format of the game against Bangladesh in September 2017. Cartwright, who has also played in two ODIs last year, has been quite impressive in the 2017-18 Sheffield Shield season, notching up 83 and an unbeaten 111-run knock against South Australia at the WACA Ground in March.

Middlesex will kick start their English county season against Northamptonshire on April 13. 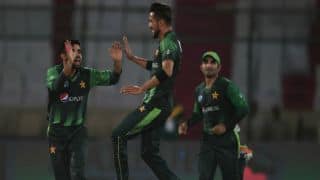