Former England captain Mike Brearley will deliver the Raj Singh Dungarpur (RSD) 'Voice of Cricket Lecture' on December 19 which will be the 76th birth anniversary of the former Board of Control for Cricket in India (BCCI) Raj Singh Dungarpur. 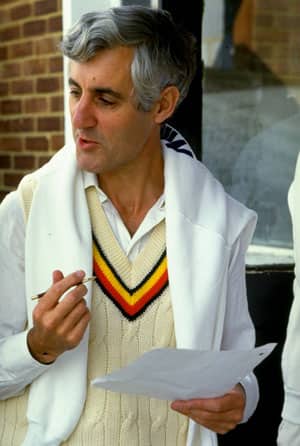 Mike Brearley will be the second cricketer to deliver the Raj Singh Dungarpur Voice of Cricket Lecture after former India captain Mansur Ali Khan Patuadi, who delivered the inaugural lecture in 2010 Getty Images

Former England captain Mike Brearley will deliver the Raj Singh Dungarpur (RSD) ‘Voice of Cricket Lecture’ on December 19 which will be the 76th birth anniversary of the former Board of Control for Cricket in India (BCCI) Raj Singh Dungarpur.

Brearley who will deliver the lecture as an introduction to the second edition of the World Cricket Summit (WCS) will be the second cricketer to deliver the Raj Singh Dungarpur Voice of Cricket Lecture after former India captain Mansur Ali Khan Patuadi, who delivered the inaugural lecture in 2010.

The grand nephew of Dungarpur, Jaideep Sinh Parmar, in an interview to Times of India said the event is organised in memory of the late BCCI president.

He said,” Ever since we lost Raj Singhji, we had been thinking of establishing something in his honour. The thought was shared by cricketers and cricket voices throughout the world, who felt Indian cricket had lost its voice.

“It was only natural then that what we formulated to commemorate him would have more to do with cricket and less with him. “

Parmar added that it was former Idnain captain Pataudi who helped him to coin Brearley s name last year as the speaker for the second edition of the WCS.

“This was institutionalized by MAK Pataudi. There was no shortlist of names in the inaugural year – it only had to be Nawab sahib. There is no one more respected, knowledgeable and perhaps no one that the cricket world would have been more eager to hear.

“Nawab sahib and Raj Singhji shared a friendship that spanned many decades and it took him just a minute to agree,” he said.

He added,” Nawab sahib and I, for instance, picked Brearley’s name together in his living room at Vasant Vihar. Similarly, I have bounced off names with Kapil. He had promised his support to this initiative at the outset and has always been a phone call away, be it in shortlisting names or inviting cricketers that I may not have ready access to.”

Parmar added that this year s panel for discussion at the summit will include the likes of Sanjay Manjrekar, Ajay Jadeja, Kapil Dev, and Ian Chappell to join Brearley.

He said,” It is a joint effort between me and our earlier panelists. There are two parts to the WCS: the panel discussion, which centres on topical news stories debated by an eminent panel. This year the most topical subject will be India’s tour to Australia.

“For the panel discussion, we try and pick cricket legends who are erudite and whose opinions are adhered to and can take the debate further.

“This year we have Sanjay Manjrekar and Ajay Jadeja. Joining them will be Kapil Dev, always an opinion-maker together with Ian Chappell and Mike Brearley. It is a well-rounded panel and we are certain the audience will relish the ensuing debate. “

Parmar added that the WCS has a wide support from the cricket fraternity all over the world. He said,” While the WCS immortalises Dadusa, it is primarily a forum with a singular agenda of pursuing excellence in cricket. Last year, this was just a thought.

“However, everyone we approached not only gave a vehement thumbs-up to the idea, but also came forward to support it. On a phone call we had legends like Bob Simpson, Ali Bacher and John Wright (he was a last-minute dropout after being selected as New Zealand coach just before the World Cup), and Indian greats like Bishan Singh Bedi, Kapil Dev and, of course, Nawab Mansur Ali Khan, who instituted the RSD Voice of Cricket Lecture. “

Parmar was also ecstatic in sharing that the event has surprisingly received sponsorship,” Most of the companies we approached found resonance in the idea and came forward readily, “he said.” Not only have we managed to pull sponsors and associates in a recessionary climate, they have all found tremendous value in the association and have renewed their partnership. “

“Other eminent figures have come forward too. The creative for the WCS, for example, is being done by O&M under Piyush Pandey’s supervision. He says he’s not doing this for me, but for his former Ranji captain, Raj Singh Dungarpur! “