When Hanuma Vihari walked out with India at 160 for six in the final session and James Anderson and Stuart Broad in the middle of a fiery spell, to call the 24-year-old Test debut a baptism by fire would not have been misplaced.

And it sure was. For the first seven deliveries, Viharai looked of of sorts. Nerves were getting the better of him. He fell over to the incoming deliveries and looked just a tad slow – in terms of getting into position and getting the bat down from a rather high backlift. He should have been gone for 0 when Stuart Broad got one to nip back in and Vihari on the back foot was beaten all ends up.

On-field umpire Joel Wilson came to his aid and rulet it not out and surprisingly England didn t take the review. Vihari was rapped on the pads once again with Wilson this time raising his finger. Vihari took the review and survived.

He got his first international runs with a tap in front of the wicket and then played out of control short of length deliveries – one of which was a top-edge six and the other falling short of Adil Rashid at fine leg.

Then Vihari settled in and cracked a few luscious drives on the offside to get going. He remained unbeaten at stumps on day two on 25 with Part 1 of the battle won.

He breezed through Part 2, and in company of Ravindra Jadeja played out the opening one hour of play with little discomfort and compiled his maiden Test fifty in his debut innings becoming the 26th Indian player to record a 50-plus score on Test debut. He was eventually out for 56.

His effort is now the sixth highest for an Indian on debut batting at number six. 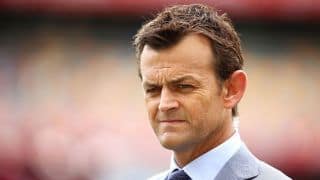