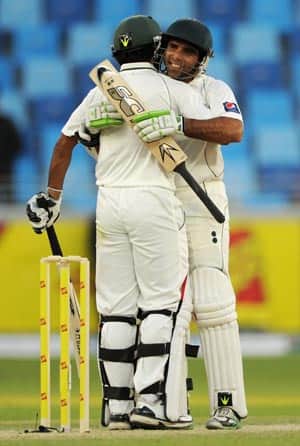 Pakistan, led by paceman Umar Gul (4-63) and spinners Abdul Rehman (3-37) and Saeed Ajmal (3-42), wrapped up England’s second innings at 160 before notching the required 15 runs for a win with two days to spare at Dubai Stadium.

Ajmal took a career best 7-55 to rock England for a paltry 192 in the first innings. Pakistan scored 338 to take a decisive 146-run lead.

And the manner of victory surprised Misbah.

“Obviously we were not expecting it would finish so early, but I guess all the credit goes to the bowlers. No team would have expected such a victory against the world number one,” said the Pakistan captain.

The victory gave Pakistan a 1-0 lead in the three-Test series. The second Test will start in Abu Dhabi from January 25.

It also gave Misbah seven wins in 13 Tests as captain since taking over in October 2010.

“We are trying to be one of the best teams in the world, but I think it’s still a long way to go, we have to just improve much more than this, and we are just on the right path,” said the 37-year-old Pakistani captain.

“It’s a wonderful performance by our bowlers, they stuck to their task and it was total variations of Ajmal on which they made mistakes. It’s a very big win for us which will increase our self confidence,” said Misbah.

The Pakistan captain however expects England to bounce straight back.

“When you are number one team there is something that makes you number one, they have good quality cricketers, they are fighters and they can really come hard on us,” he added.

England captain Strauss said Pakistan surprised them after they won the toss and batted on day one.

“We were caught off guard in the first session of the first day on a very flat wicket, from then on Pakistan was in front and never let us back into the game and you need to congratulate them for the way they played,” said Strauss, who made only 19 and six.

Strauss, under whom this is England’s first defeat in ten Tests, pointed a finger at batsmen.

“Obviously we are disappointed by the way we batted in the both innings, primarily in the first innings because it was not a 50 for five wicket. So you need to learn some lessons from that and move forward.

“The most important thing is not to be too carried away by the result and obviously learn the lessons from that and make sure you don’t make those mistakes again,” said Strauss, who added that he was not worried about the number one ranking.

“This is not the time for us to be worrying about number one or anything like that. What we need to do is make sure we don’t play this type of cricket we played in this game in the next Test and that is what our focus is on.

“The feeling of disappointment is a good motivation to make sure that it does not happen again,” said Strauss.

Strauss, whose team played the first Test since beating India in August last year, refused to agree England were under-prepared.

“Our preparations were good so there was nothing in the back of our mind that we were undercooked or underprepared and to that extent we are all surprised by how things turned out.

“But it has happened, it is done and finished.” (AFP)