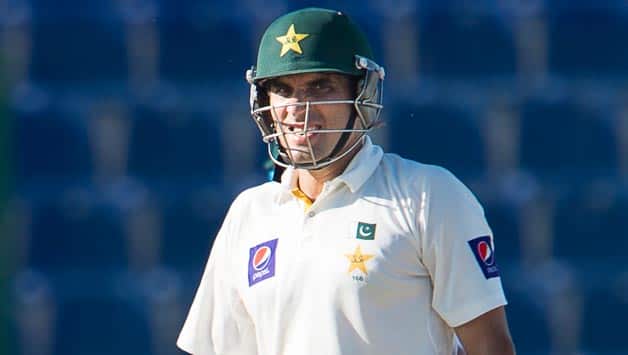 Misbah-ul-haq scored a century in the first Test © AFP

Pakistan won the first Test against South Africa by seven wickets on a spin-friendly Shekih Zayed Stadium pitch with a day to spare, taking a 1-0 lead in the two-match series.

Misbah said his team benefitted on home-like conditions suited to his bowlers and batsmen.

“The change of conditions made a big impact,” said Misbah, whose team lost to Zimbabwe by 24 runs in the second Test between the two countries in September, a result that squared the series 1-1.

“Zimbabwe in Harare benefitted from the swing conditions but here it was totally different and we had that belief that conditions would suit us before the match,” said Misbah.

Pakistan bowled South Africa out for a paltry 249 in the first innings and then put on a big 442 total with 146 from opener Khurram Manzoor and 100 from Misbah, taking an invaluable 193-run lead.

South Africa hardly avoided an innings defeat with AB de Villiers notching a fighting 93 before they were bowled out for 232, giving Pakistan a 40-run target to win.

Saeed Ajmal led the attack with 4-74 and was ably supported by paceman Junaid Khan who took three wickets and left-arm spinner Zulfiqar Babar who took two.

Misbah hailed the result as it also followed the 3-0 whitewash suffered at the hands of the South Africans on their patch earlier in the year.

“I think conditions do play an important role. When we went to South Africa we lost and now South Africa are the number one team,” he said.

“England also struggled here, I think conditions have a big role in results of Tests,” said Misbah whose team last year beat England 3-0 in their adopted home of United Arab Emirates, where they have been forced to play since terrorists attacks on the Sri Lankan team bus forced them to play on neutral grounds.

Pakistan were given a solid 135-run stand by Manzoor and debutant Shan Masood, who made 75.
Proteas skipper Smith, whose team had been unbeaten for the last 15 Tests, said his team were “extremely disappointed”.

“We haven’t been in this position too often of late. I think we have been outplayed before the completion of four days,” said Smith, who made 15 and 32 on his return to international cricket after a 21-week lay-off due to ankle injury and subsequent operation.

Smith admitted Pakistan dominated throughout the match. “Right from the first session Pakistan had been ahead of the game. Even though we showed character to fight until the end, I think Pakistan have been better than us and we have to be honest about that.”

Smith hoped his team would perform better in the second and final Test, starting in Dubai from October 23.
“I think it will hurt and the team has too much ability not to do well,” said Smith.