A depleted Zimbabwe team claimed three early wickets on the first day of the first Test against Pakistan at the Harare Sports Club on Tuesday. Pakistan were 74 for three at lunch.

Pakistan won by 221 runs
Man of the Match: Younis Khan 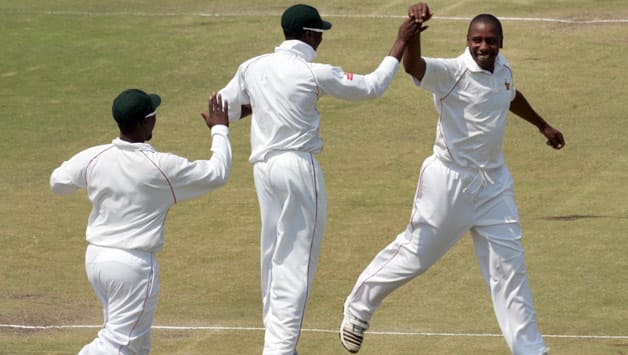 A depleted Zimbabwe team claimed three early wickets on the first day of the first Test against Pakistan at the Harare Sports Club on Tuesday. Pakistan were 74 for three at lunch.

Hamilton Masakadza, standing in for regular captain Brendan Taylor, was justified in his decision to send Pakistan in as the tourists lost their first three wickets for 27 runs inside the first hour.

Opening bowlers Tendai Chatara and Tinashe Panyangara, playing in their third and fourth Tests respectively, both gained early movement and lift off the pitch.

Chatara struck first when Mohammad Hafeez was caught at second slip off a ball which lifted sharply.

Panyangara followed up with the wickets of Khurram Manzoor, who went back on his stumps and was leg before wicket to a ball which cut back, and Younis Khan, who was bowled when he played forward tentatively and the ball trickled back onto his stumps.

Azhar Ali and captain Misbah-ul-Haq led a recovery, putting on an unbeaten 47 for the fourth wicket.

Taylor withdrew on the morning of the match after his wife gave birth to the couple’s first child. Pakistan-born Sikandar Raza replaced Taylor, earning his first Test cap.

The withdrawal of Taylor, Zimbabwe’s leading batsmen, was the latest setback for the host nation following a pay dispute which threatened to prevent the match from taking place.

The players only agreed on Monday to play following a commitment by their board to pay outstanding salaries before next week’s second and final Test in Bulawayo.

Zimbabwe fielded an inexperienced bowling line-up, following the retirement of Kyle Jarvis in order to pursue a county cricket career in England and Graeme Cremer’s unavailability because of the pay issue. Batsman Sean Williams also withdraw because of the pay dispute.