Pakistan captain Misbah-ul-Haq is keen to see that his run-scoring spree not only helps his side win matches but also inspire his fellow batsmen in the team. 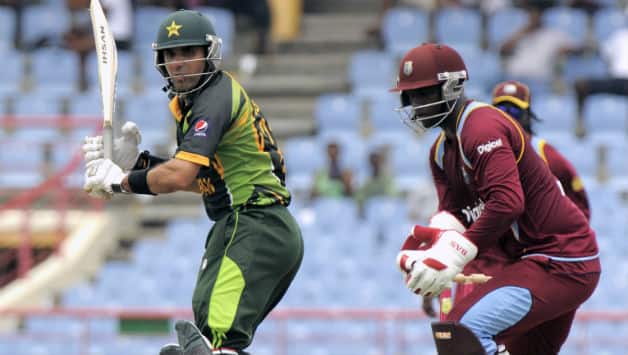 Pakistan captain Misbah-ul-Haq is keen to see that his run-scoring spree not only helps his side win matches but also inspire his fellow batsmen in the team.

“It is great to be scoring runs so consistently but I want to see these runs being converted into victories for the team. It is a fact that our batting has struggled in recent times so I am very satisfied with my form,” Misbah, who scored a match-winning 52 in the fourth One-Day International (ODI) against the West Indies on Sunday, said.

“I know this form will not last forever because that is something that happens to every professional cricketer. But right now I am feeling very confident going out to bat and I just want this confidence to rub off on our other batsmen,” he added.

Misbah became the highest run-scorer in ODIs without scoring a century on Sunday although he has 28 half centuries to his credit.

Misbah also said that Pakistan were trying out six bowlers in every match as it suits modern requirements of the game.

“In such situations not all bowlers can complete their full quota of overs but in modern day cricket it is imperative to have a extra bowling option,” he said.

Meanwhile Pakistan’s former captain Ramiz Raja has urged the cricket authorities to give more confidence and a proper tenure to Misbah as captain.

“I have been saying that Misbah is your best batsmen now and he is showing this in every match. But I just feel as captain he needs to be given more confidence and a proper term because after all whenever the team does badly he is made the target of criticism,” Ramiz said.

“No matter whether you have a head coach or batting coach but it must be the captain who calls the shots because after it is Misbah who has to bear the brunt of criticism when the team is not doing well,” he said.