Misbah-ul Haq: Hard-decisions required to be made against spot-fixers to safeguard future of Pakistan cricket

Misbah-ul Haq: Hard-decisions required to be made against spot-fixers to safeguard future of Pakistan cric

Pakistan's Test Captain Misbah-ul Haq on Friday called for life bans and strict enforcement of laws against the players involved in match-fixing or spot fixing.

Karachi: Calling for no mercy against anyone involved in corrupt practices within cricket, Pakistan‘s Test Captain Misbah-ul Haq on Friday called for life bans and strict enforcement of laws against the players involved in match-fixing or spot fixing. “Anyone found involved in corrupt practices like this should be barred for ever from playing cricket. Hard-decisions are required to be made against the culprits to safeguard the future of Pakistan cricket,” Misbah told Dawn. Veteran Misbah, now 42, is leading Faisalabad in the Patron’s Trophy Grade II matches and has regained his form by striking back to back centuries against Hyderabad and Abbotabad ahead of the West Indies tour. Misbah-ul-Haq calls for life ban on players found guilty of spot-fixing

“To tackle the corruption issue, we need to work at the grassroots level on properly educating the upcoming players in schools and clubs. We must ensure they know everything about the related laws and the authorities should implement the laws strictly. Once the laws are enforced, any player committing any wrongdoing should never be allowed to play cricket. Otherwise it will be difficult for us to control corruption,” he said. Commenting on the revival of international cricket in Pakistan with the PSL final in Lahore, Misbah said the development was a major step towards that goal.

“The country’s security situation is much better than what it was seven, eight years ago and I sincerely hope that international cricket could return to Pakistan in two years.” Answering a particularly sticky question about not hanging his gloves after the England series win when he was at his prime, Misbah said: “Yes, I could have retired after the series against England in England or even before that in Dubai after the whitewash against England. I could have said, ‘Ok good, let’s quit after this victory and let the team face the music in New Zealand and Australia. In the past too, many players missed the tours to Australia and i could have done the same. But I could never be so selfish so as to leave my team all alone to face that stiff challenge. Yes I lost there as captain, but I didn’t desert my team and am proud of it.” 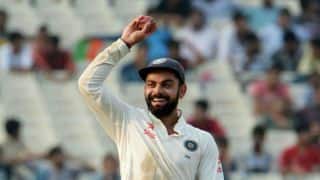