Australia’s Mitchell Johnson has continued to storm through the charts in the latest International Cricket Council (ICC) Test bowlers. Johnson has jumped five places to fourth following his spectacular match-winning haul of 12 for 127 in the Centurion Test against South Africa.

Named Player of the Match, Johnson has enjoyed a spectacular run this season and now has a total of 49 wickets from six successive Tests.

The left-arm pacer, who first entered the top-10 in November 2008, reached a career-best second in March 2009. The seamer remained a permanent fixture in the top-five until October 2010.

Vernon Philander has ceded the No 1 position to teammate Dale Steyn after a 55-day reign. Philander, who became the No 1 bowler on December 22, picked up a wicket in the Centurion Test to drop 11 points and finish on 898, three behind Steyn.

South Africa’s spearhead Steyn, who had figures of Four for 78 and Two for 61 in either innings of the Test, has retained his pre-series points. He first reached the No 1 position April 3 in 2008 when he drew level with Muttiah Muralitharan for one week. He regained the top spot in July 2009, overtaking Muralitharan.

Thereafter, Steyn spent 187 matches or 1,630 days as the top-ranked bowler, the second-most number of matches after Muralidaran. His run was ended when Philander overtook him in December 2013.

Meanwhile, Australia’s Ryan Harris continues to be the highest-ranked bowler for his side after retaining his pre-series third position. This means that when the second Test between South Africa and Australia gets underway Thursday in Port Elizabeth, the top-4 bowlers will all be in action with Peter Siddle in sixth (down by one) closely following them.

New Zealand’s Tim Southee moved up a place to a career-best ninth following his match haul of Five for 143 in the Wellington Test against India. Southee is now on 757 points, just 10 behind eighth-ranked teammate Trent Boult. 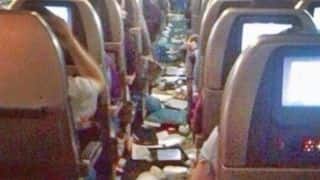