The scans revealed a hairline fracture to the bone in the right forearm, said South Africa team manager.

Australia pacer Mitchell Johnson’s bouncer that hit South Africa all-rounder Ryan McLaren on hand has resulted in a hairline fracture, ruling him out of the remainder of the Zimbabwe Triangular Series 2014.

“The scans revealed a hairline fracture to the bone in the right forearm, which rules him out of action for the next three weeks. He will return back to South Africa on Thursday morning,” Moosajee added.

Talking about that delivery, Johnson admitted he got carried away looking McLaren on strike. “I probably got a bit carried away when McLaren came in,” he said.

During the Test series in South Africa earlier this year, McLaren as hit on the head by Johnson during the first Test in Centurion, which resulted in the South African all-rounder been ruled out of the second Test against Australia. A delivery from Johnson smashed McLaren in the side of the helmet, which left him bleeding from ear.

According to AFP, McLaren received treatment on the field after a short ball from Johnson crashed into his batting helmet. He resumed batting before being dismissed by Johnson soon afterwards. 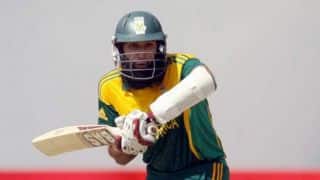