Australia lead the series 1-0 with the final match set to be played at Adelaide.

The second Test between Australia and New Zealand at Perth ends in a draw after New Zealand finish Day Five on 110 for 2 after they were set a target of 321 in 48 Overs. Australia had earlier in the day declared at 385 for 7 after centuries from Adam Voges and skipper Steven Smith got the hosts to a safe position. It was a day when Mitchell Johnson decided to call time on his international career. He scored 29 with the bat and picked up a couple of wickets with the ball in his final innings. Australia lead the three-match series 1-0 with the third and final Test set to be played on November 27 at Adelaide. Full scorecard: Australia vs New Zealand 2015-15, 2nd Test at Perth

The Adelaide Test will be the first ever Day/Night Test in history. Australia declared at 559 for 9 in the first innings and rode on a double century from David Warner. Usman Khawaja also scored another century, continuing his good run of form the previous Test. New Zealand fought back well, courtesy of a 290 from Ross Taylor and 166 from Kane Williamson. New Zealand finished at 624, taking a lead of 65 runs. Mitchell Starc was the star with the ball for Australia with four wickets and Nathan Lyon picked up three wickets. Full Updates: Australia vs New Zealand 2015, 2nd Test at Perth, Day 5

Australia had a chance to make a sporting declaration on the final day, but they chose to play it safe, bu ensuring that they set New Zealand an improbable target. The draw has ensured that Johnson’s final Test ends in a draw with Australia still leading the series 1-0.

Man of the match: Ross Taylor 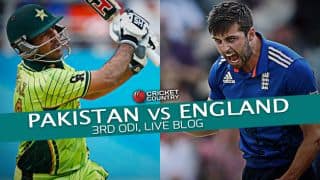