Mitchell Marsh's miserable summer has got worse with the allrounder needing surgery following a blow to the groin in training, officials said.

Mitchell Marsh‘s miserable summer has got worse with the allrounder needing surgery following a blow to the groin in training, officials said.

The 27-year-old, who has been dropped from the Australian Test, one-day and Twenty20 teams, was struck during a net session in Perth ahead of Western Australia’s Sheffield Shield clash with New South Wales.

“As a result of the impact, Mitch has undergone a minor surgical procedure and he won’t be available for this upcoming Shield fixture,” WA official Nick Jones told the Cricket Australia website late Wednesday.

“Mitch’s recovery will be monitored closely over the coming week, before a decision can be made around his availability for the Round 8 Shield match.”

It capped a horror few months for the WA skipper, who was hoping to use the Sheffield Shield to regain form, with an eye on the Ashes tour of England later this year.

Marsh hasn’t batted at first-class level since the Boxing Day Test against India in December.

He was dropped after that for the rest of the India series and the subsequent two Tests against Sri Lanka, despite being named vice-captain last September.

Marsh was also overlooked for Australia’s current one-day and Twenty20 tour of India.

“I’ve been knocked around a bit this summer. But my dream of playing Test cricket is still not over. I’m only 27. I’ll keep fighting,” he said recently. 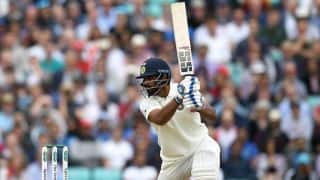