Mumbai Indians will fancy their chances and look to win the match easily.

Mitchell McClenaghan and Jagadeesha Suchith’s brilliant spells help Mumbai Indians (MI) restrict Sunrisers Hyderabad (SRH) to a paltry 113 in Indian Premier League (IPL) 2015 Match 56 at Hyderabad. SRH had a disastrous beginning to their innings as they lost both their openers early. Dhawan went for just one as an excellent yorker from Lasith Malinga on off stump beat him on pace and his wicket was uprooted. LIVE BLOG: SRH vs MI

He was immediately followed by his skipper David Warner, who tried to pull a short delivery from McClenaghan and the ball took the top edge and was taken by Kieron Pollard, who ran into take a simple catch from backward point. England One-Day International (ODI) skipper Eoin Morgan got off to a patient start but he cut the ball straight down the throat of third man to put his side in further trouble. Live Scorecard: SRH vs MI

Things went from bad to worse when man in form Moises Henriques, the man in some good form was stumped off the bowling of Suchith. Naman Ojha’s horrible IPL 2015 continued as he was dismissed off the very first delivery for a duck, giving Suchith a hattrick opportunity. THe hattrick delivery was however safely negotiated by Karn Sharma. SRH vs MI, Free Live Streaming Online

KL Rahul was the lone hope for SRH from there but he too fell after getting off to a good start for 25, leaving it to the lower order to get the team off to  a good score. Karn and Ashish Reddy then came together to rescue their team. But Reddy was looking in decent form but he too fell just when he was looking to get a move on on 17. It looked as though Pollard had overstepped, but replays suggested that a little art of the heel was behind the line.

Dale Steyn’s late onslaught got SRH past the 100-run mark. The bowlers do not have much to bowl at but SRH have some wonderful bowlers, who could swing it in their favour.

Earlier SRH skipper Warner had won the toss and elected to bat first. SRH got back Reddy in place of spinner Bipul Sharma, but MI went into this game with the same playing XI. This is a crucial match for both teams as the winner of this match will go through to the playoffs of the IPL 2015 and will go to No.2 on the points table. 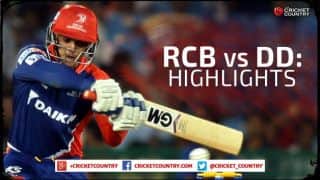 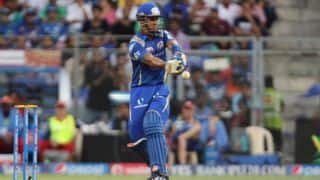