The prospect of Australia pacer Mitchell Starc returning to top-flight cricket took a huge positive on Tuesday when he was seen participating in New South Wales intra-squad one-day match for the Blues.

Starc, who is on a comeback trail after missing the fourth Test in South Africa earlier this year, and later, the 2018 IPL with a tibial bone stress reaction to his right leg, bowled six overs for 38 runs without showing any worrying signs, an indication that the fast bowler might well be on his way to playing the two-Test series against Pakistan in the UAE in October.

Starc admitted to have been working on a few things in order to be effective upon his return to international cricket.

“It’s only about the fourth bowl I’ve had to batsmen, so it’s a bit different out in the middle than in the nets,” Starc said on Tuesday. “(I’m) trying to make a few changes to the action and the run-up, trying to find some rhythm through there and have a nice hit out, out in the middle with the Blues boys.”

The tour of UAE might is still a couple months away, which gives Starc the opportunity to gain more match practice. He is scheduled to play one more game before the Blues head to Brisbane for a pre-season camp. These include two matches against Queensland and the National Performance Squad.

However, what Starc will really be eyeing to get in match groove is the two four-day games featuring Australia A and India A. Under Mitchell Marsh, the left-armer will be keen on impressing the selectors.

“There’s an Australia A tour over there where the guys are getting some time in the subcontinent,” Starc said. “The guys in Australia are spending some time, like us, out in the middle today (Tuesday). The prep is going really well for everyone looking to put their hand up for that tour.”

Earlier this month, Marsh had expressed confidence over the possibility of playing the series against Pakistan.

Starc had a four-month rest off cricket. He underwent rehabilitation period and spent hours at the gymnasium, and seemed confident: “The body feels good. I think the plan is to bowl off my full run at about 85 per cent intensity. It s been a quick progression but a bit of a different rehab in terms of my tibia and not my foot or my ankle this time.” 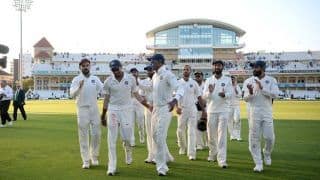 India vs England 2018, 3rd Test, Day 5 LIVE Streaming: Teams, Time in IST and where to watch on TV and Online in India