While Mitchell Starc struggles hard to regain the consistency and rhythm, Pat Cummins‘ graphs continues to rise. Test after Test, Cummins has continued to dish out impressive performances with the ball and with the bat too.

Against Sri Lanka, in a one-sided win, he was the star taking career-best 6/23 in the second dig to follow figures of 4/39 from the first. There has been a growing call for Cummins to take the new-ball duties from Starc with former national selector Mark Waugh suggesting the hosts could opt for the change in the second Test at Manuka Oval.

In his past five Tests, Starc has pinched 15 wickets at 36.46. But if Australia captain Tim Paine is to be believed, the 29-year-old continues to be their best bet with the new ball and is hopeful his form will change for good come second Test.

“We’ve used Starcy (Starc) for a long time with the new ball and we think he is still our best new-ball bowler when he gets it right, so we’ll always give him the first few,” Paine said on Thursday. “Hopefully he can swing a few and if he does we know he is more than likely to get an early breakthrough. What we have done is brought Pat on a lot earlier than what we have done in the past.”

Starc averages 29.10 in 50 Tests in which he has 201 wickets. Paine said the fact that despite not being 100 per cent, Starc is still finding ways to take wickets which only shows what he’s capable of when at his best.

“We’re still reasonably happy with his output. He’s not 100 per cent at his best but I think that’s a sign of how good a bowler he is that he’s still finding ways to pick up wickets at certain times, and like I said post-Brisbane Test that when he gets it right, he’s going to be devastating. Hopefully it will be this Test straight up tomorrow morning or potentially some reverse-swing when he is devastating. Hopefully there’s a chance of that happening here,” Paine said.

Another player who was expected to lead Australia’s charge in the absence of senior players was Usman Khawaja. Ricky Ponting had predicted the left-hander will outscore Virat Kohli during India’s visit for a four-Test series.

However, he managed to cross fifty just once across eight innings and was out for 11 against Sri Lanka in Brisbane. Alongside Starc, his place in the Test squad has been put under the microscope but Paine has thrown his weight behind the Queenslander as well.

“Usman is a very experienced player, he knows what he wants to do and how to go about it, he just hasn’t scored the runs he would like. He had that [knee] injury at a time he was batting the best he’s ever batted. He’s the same as Starcy, he’s one innings, half an hour away from being one of our best players. We know that,” he said. 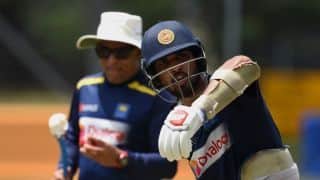