Mithali Raj again called for a second referral in the 34th over for a leg-before against Fran Wilson off Harmanpreet Kaur but this time DRS denied her and India of any success.

The second match of ICC Women s World Cup 2017, between India and England, saw the Decision Review System (DRS) being used for the first time in women’s cricket. The International Cricket Council (ICC) decided to use the DRS technology across 10 matches that will be broadcast in group stage. In addition, DRS will be used in both semi-finals and the final as well. India, however, became the first team and Mithali Raj the first-ever Women s captain to take a successful DRS, with England s Natalie Sciver becoming the first victim. Live cricket score, India Women vs England Women, 2nd match, ICC Women s World Cup 2017

England, chasing 282 to win, were 67 for 2 when Mithali Raj asked for the DRS call. Natalie tried to sweep Deepti Sharma only to glove it straight into the hands of the wicketkeeper. Given not out by the umpire, after witnessing Deepti s conviction, Mithali called for the DRS. The replay showed a faint nick off the glove, and hence on-field umpire had to overturn his decision.

Mithali again called for a referral in the 34th over for a leg-before against Fran Wilson, off Harmanpreet Kaur, but this time DRS denied her and India of any success. This meant Mithali s DRS tally success loss ration reads 1:1.

Speaking of firsts in the Women s World Cup, captain’s emojis can be unlocked by hash-tagging the player’s name much like we saw in IPL.

The ICC will also host live social Q&As with commentators, players and special guests throughout the event as a part of their #AskCaptain initiative.

Also for the first time the ICC has developed a fantasy game, which allows fans to create their own leagues and compete against one another. The ICC will continue its alliance with Facebook to bring more FB Live with players and commentators. 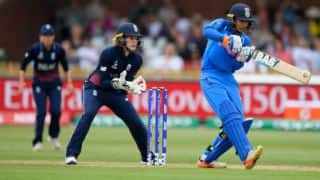