India batter Mithali Raj on Friday became the first woman cricketer to feature in 200 one-day international matches. The third ODI between India women and New Zealand women at Seddon Park, Hamilton marks the 200th occasion for Mithali in ODIs, although she could only contribute with nine runs before being dismissed by Leigh Kasperek.

In April last year, Mithali had become the most capped ODI women s player after she surpassed Charlotte Edwards record of 191 appearances. Among active cricketers, Mithali is light years ahead of the next in line Suzie Bates, who is playing her 118th one-day international.

As of Friday, Mithali, who made her debut in June 1999, has served the country for 19 years and 219 days, next only to Sachin Tendulkar, Sanath Jayasuriya and Javed Miandad in terms of longevity. She has featured in 200 of the 263 ODIs India women have played. In these 200 matches, Mithali has scored 6613 runs, becoming the leading run-scorer in women s ODIs and even proved her credentials as captain. She has led India on 123 occasions.

Mithali also has the best average in successful chases for at least 20 innings 112.29, ahead of Bates and her New Zealand counterpart Amy Sattherwaite. With seven centuries and 52 fifties, Mithali also holds the record for the most 50-plus scores in ODIs.

Woman cricketers with the most number of matches 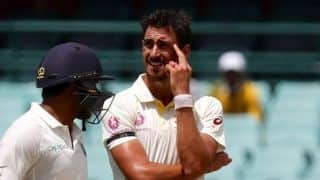 Mitchell Starc no longer a certainty for Ashes: Mark Taylor