Honestly when I was pitted against Virat Kohli, I gave up, said an amazed Mithali Raj.

New Delhi: Surprised at being selected for the Padma Shri, Indian women’s cricket team captain Mithali Raj says she was not expecting the prestigious honour with some men’s team superstars also in the race.

“Honestly when I was pitted against Virat Kohli, I gave up because when you compare us with men’s cricket then we think that we may not get it. So I was not expecting it, but it came as a pleasant surprise,” Mithali told PTI from her Hyderabad home.

A veteran of 153 ODIs, 10 Tests and 47 T20 internationals since making her debut in 1999, Mithali, 32, believes that the Padma Shri will certainly help the cause of Indian women’s cricket.

“It (the national awards) is a nice way of appreciating your efforts. Because at a time when I started playing cricket, there was no awareness for women’s cricket. People were not even knowing that women’s cricket existed. And from that phase to today where people would want to follow women’s cricket, I think we have come a long way,” Mithali said.

“These awards will really prop up the young girls and players to take up the sport and do much better. With this award probably people will be following women’s cricket keenly and will take a note of the international calender of women,” she added.

Asked about her view on the recent trend of sportspersons demanding their due from the concerned authorities, Mithali said that ‘to each his own’.

“There are some people who feel that they deserve a particular award or recognition, but I don’t fall in that category. I am very laidback and I take it as it comes. So it’s fine with me. I have got it and am very happy about it,” she said.

The veteran batswoman also talked about Indian men’s performance before the upcoming Internationa Cricket Council (ICC) World Cup 2015 and said that the batsmen can play cover up for the weak bowling.”Well maybe, bowling is a concern for Team India but I believe that they will make it up with their strong batting.

We have a very good batting line-up, it’s just a matter of the core coming into form and I am sure that the batting will definitely cover up for the bowling,” Mithali said.

“You can’t really say whose going to be the favourite because we have seen a lot of ups and downs in the World Cup. I am rooting for India because I definitely want them to do well in the showpiece event,” she added.

Devoid of match practice, the women’s team did manage to beat England in their one-off Test outing after eight long years in August 2014 and Mithali hopes for more such opportunities in the near future.

“I am sure with the new format of the ICC, we will get to play more matches. So, that way we will have more news coming in from women’s cricket. Earlier there were hardly any international series for people to follow or for us to be in news more often. But from now with more regular international series and matches, things will start rolling for women’s cricket,” Mithali, who made her Test debut against England in Lucknow in 2002, said.

Commenting on drawing a balance between recognition and play, Mithali was clear that playing more cricket has always been up on her wish list. “I am looking forward to more cricket. That’s always what I wanted. We have a few series coming up and most importantly the 2017 World Cup. I am hoping by then I would be able to make up half of the damage what was done in the 2013 edition.

Quite a miserable one and I would like to make up for it and I am looking forward to that,” she said. The ever-humble Jodhpur-born player did not forget to credit her parents for all her achievements and also the recent honour that she cherishes. “I am also very happy for my parents who have sacrificed so much for me. It is for them that I am very happy,” she concluded. 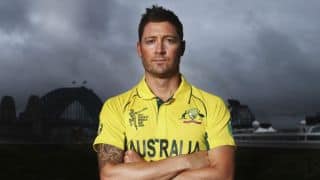