England coach Trevor Bayliss has already hinted Lyth will not be opening against Pakistan.

All-rounder Moeen Ali has declared his readiness to open the batting for England even though he is well aware of the consequences for Adam Lyth‘s Test career. Off-spinning all-rounder Ali has never batted higher than number six for England but averages 31.20 in 16 Tests. He has been touted as a potential opener for England’s series against Pakistan in the United Arab Emirates later this year on the grounds that this would allow Alastair Cook’s side to play two specialist slow bowlers on pitches known for aiding spin.

Finding a reliable partner for Cook at the top of the order has proved a tough task for England since the retirement of former captain Andrew Strauss in 2012. Several batsmen have been tried and found wanting, with Adam Lyth the latest to be given the role. Despite impressing for county champions Yorkshire and scoring a hundred in his second Test against New Zealand at his Headingley home ground, Lyth averaged just 12.77 after playing in all five matches of England’s 3-2 Ashes series win.

England coach Trevor Bayliss has already hinted Lyth will not be opening against Pakistan and Ali, who made his name as a top-order batsman with Worcestershire, is keen to fill the spot if a vacancy is created. “I would love to be batting back up the order, because coming in at number eight it was already 80 for six or something like that,” Ali wrote in his England and Wales Cricket Board blog published Wednesday.

“I certainly wouldn’t mind opening, in Tests as well as white-ball cricket — even though I’ve never done it in first-class cricket, I have in the second team as well as in one-day stuff with Worcestershire and England.”

However, Ali added, “But I feel a bit bad talking about that because of Adam Lyth. It’s probably the hardest job in cricket, opening the batting, especially in the Ashes, and he must be so frustrated because I always thought he looked all right against the new ball — he just couldn’t go past getting those starts.” 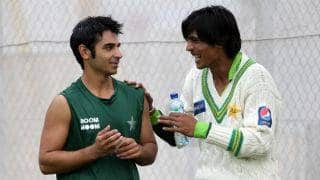