England did not confirm whether Moeen Ali was given official permission to wear the bands.

England all-rounder Moeen Ali was seen sporting wristbands that say “Save Gaza” and “Free Palestine” on Monday at the Ageas bowl during the third Test against India. This might get him into trouble as the International Cricket Council (ICC) might not overlook this issue.

England did not confirm whether he was given official permission to wear those bands as of yet. Moeen Ali was seen helping to raise fund for the Gaza relief efforts.

The ICC’s Code of Conduct does not allow the players to display any logos other than their bats and approved commercial backers. But they do not have any particular guideline regarding political statements and gestures. 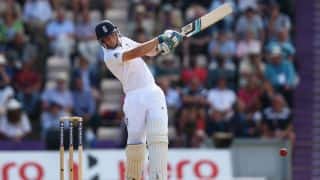