Mohammad Aamer: Virat Kohli and I share a good friendship

Mohammad Aamer: Virat Kohli and I share a good friendship

There were many who wanted Mohammad Aamer to be banned for life. There were some who greeted the Pakistani youngster with open arms. Indian skipper Virat Kohli was amongst the ones who has been extremely supportive of the pacer.

There were many who wanted Mohammad Aamer to be banned for life. There were some who greeted the Pakistani youngster with open arms. Indian skipper Virat Kohli was amongst the ones who has been extremely supportive of the pacer. Aamer cannot change opinions about people but hopes that he is forgiven for his role in spot-fixing in 2010, when as a teenager he fell prey to cricket’s ugly side and lost 5 years of his peak time. ALSO READ: Hope Rohit Sharma’s opinion about me has changed now, Mohammad Aamer

“The best way to change opinions about you as a sportsman is by performing well. My focus is on being a good ambassador for my country on and off the field. I am aware that I cannot please everyone, but I sincerely feel that many people have changed their minds about me and I am grateful to them for that. I will continue to do my best for my country and I hope to win more of my critics over in the future with my performances,” Aamer said in an interview with PakPassion.com.

About the support he has received from Kohli, Aamer showered praises on the Indian batsman and called him “currently the best batsman in the world”. He also emphasised on the camaraderie the duo share. Aamer wants to establish himself as a genuine all-rounder, and he has already received a couple of bats as a gift from Kohli, the most recent being in the group game of the ICC Champions Trophy. READ MORE: Gracious Virat Kohli and talented Mohammad Aamer: Class performers and the mutual respect

“He’s a big name and he is currently the best batsman in the world. Whenever we meet we always greet each other with respect. There is a bond and a friendship between us, a mutual respect and we are always pleased to see each other. He has given me a cricket bat as a gift on a couple of occasions, the most recent being at the Champions Trophy match in Birmingham. I think this sort of bond and friendship should be prevalent amongst all sportsmen of all nations. We are role models and we can bridge differences and bring people closer together,” Aamer added.

However, the friendship ends once they sport their respective jerseys. Aamer and Kohli have shared intense rivalry on the cricket field. Kohli fell to Aamer’s brilliance in the Champions Trophy final, and that is where India lost their hopes. The ball prior to when Kohli fell, he was dropped by Azhar Ali at slip. Aamer was visibly angry and frustrated, and thoughts of losing the contest struck his mind. Not getting overawed he stuck to the basics and got Kohli off the next ball.

“You have to be aggressive as a fast bowler. The greatest bowlers have always had that fire in their belly and I am no different. Naturally, I was angry and upset when the catch was dropped and I immediately thought, ‘Oh No’, we could now lose this match as Kohli is such a great batsman and match-winner and he could make us pay for such a mistake. However I was relieved and all smiles when the very next ball I got rid of him,” Aamer added.

Due to political tensions between India and Pakistan, the sides only play against each other during ICC events. However, players from both nations have shared excellent bonds in the past as well. And that does leave one with sweet taste in a hate-dominated world. 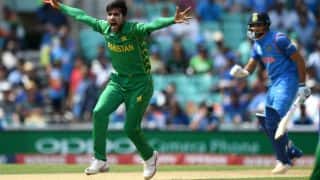 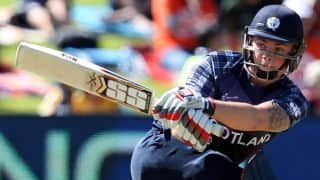