Had Aamer run a bit hard, that could not have ended in a run out.

Pakistani players are famous for their poor fielding but the same they shows it sometime during their running between the wickets. We have seen former Pakistan captain Inzamam-ul-Haq‘s running between, who has been involved in numerous run outs of his own batsmen and himself as well and seems like their current team is taking inspiration from that. In the ongoing third Test between Pakistan and West Indies at Sharjah Cricket Stadium, one such hilarious moment came into notice when Pakistan in trouble and meanwhile another poor example of running between the wickets was shown.

It happen when Pakistan were at 192 with the loss of seven wickets and with their lead of 136 runs. It was a flighted delivery by leggie Devendra Bishoo, which Mohammad Aamer went for a lofted shot over long-on for a six, followed by an excellent fielding from Roston Chase and comedy of errors. Amit didn’t move from the pitch to run and kept his eyes on the ball which Chase flung himself backward to catch the ball and then threw it back to ground. It was clear that Chase has saved that six and at that moment, Amir and Wahab Riaz rushed to take a single at least, which led to a comical run-out.

Chase wasn’t aware of the chances of getting a wicket with his throw but thanks to West Indies captain Jason Holder, who quickly moved towards the stumps to gather the ball and pluck the bails. Meanwhile, Aamer, while running towards the other end, lose his bat and did not dive. Had Aamer run a bit hard, that could not have ended in a run out.

That’s how Amir got Run out

After watching that run out, even Harbhajan Singh could not control his laughter.

Later, Pakistan were bowled out for 208 and gave West Indies to chase 153 runs to win the contest. With the start of final innings of the Test, Pakistan gave another example of poor fielding by dropping two catches at slip and both came during Aamer’s bowling. 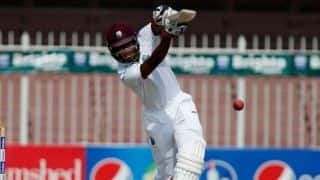 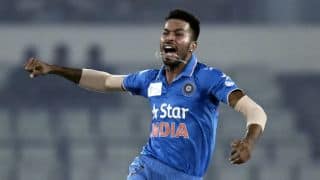