Pakistan all-rounder Yasir Arafat has called on PCB to take special care of star fast bowler Mohammad Aamer's workload if they want to save him from severe physical exertion that might cause injuries.

Pakistan all-rounder Yasir Arafat has called on PCB to take special care of star fast bowler Mohammad Aamer‘s work load if they want to save him from severe physical exertion that might cause injuries.

“I have been saying this before and will repeat it again. If Mohammad Amir or any other bowler is to be used in Test matches, then the PCB will need to ensure that they do not play 4-day county cricket games. Amir’s playing schedule needs to be managed better by the PCB. I understand that playing in the county circuit is an important part of a player’s progress but it is pretty severe in physical aspects in terms of number of games that a professional is asked to play in a season with limited time to recover in between,” Pakpassion.net quoted Arafat as saying.

Last month, the 25-year-old was left out from the five-match ODI series against Sri Lanka after he sustained a shin injury during the two-match Test series.

Reflecting on the same, Arafat insisted that Amir had performed brilliantly for Essex this summer and guided them to historic Essex title, but the continuous playing has had an adverse effect on his body.

“Mohammad Aamer performed brilliantly for Essex in the summer and helped them to a historic county title but that caused strain on his body and we saw the effects of that in his breakdown in the second Test in Dubai where his energy levels were nowhere near what was expected of a top-class bowler. He is not the young fast-bowler of many years ago and if he is to be an integral part of Pakistan’s Test squad in the future then he should not play the 4-day version in England,” Arafat said.

The right-arm pacer believes Amir’s services should be limited to the shorter versions of the game at all levels, while he could also play some of the games in the longer format.

“Yes, he can continue to take part in the shorter formats of the game at all levels but the longer format should be limited to a few games and mostly to Tests for Pakistan. It is Amir’s good fortune that there are no Test matches until May next year so he has plenty of time to recover but he is quite fantastic in the shorter forms of the game as we saw in the series against Sri Lanka. He will also be a handful for the opposition when Pakistan tour New Zealand for the LOI series later on where the bowling conditions will suit him just fine,” Arafat concluded.

Amir, who has been an automatic selection for Pakistan in all three formats of the game since his return to international cricket, had hurt his right shin during the second Test against Sri Lanka in Abu Dubai. 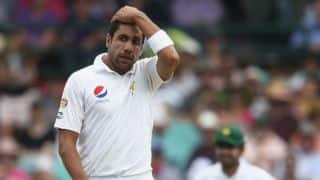