Pakistan pacer Mohammad Amir, who quit Test cricket recently, is planning to obtain a British passport and settle down in the United Kingdom.

Left-arm Pakistan pacer Mohammad Amir, who quit Test cricket recently, is planning to obtain a British passport and settle down in the United Kingdom, a source said. Amir has been married to a British national, Nargis Malik since September, 2016 and is eligible for a spouse visa, which allows him to stay in England for 30 months.

“He is clearly planning to obtain a British passport and permanently settle down in England in future,” a well-informed source said. “With a spouse visa he can work freely and enjoy other benefits as a permanent resident of UK which is why he is planning to also purchase a house in England,” the source added.

Amir, 27, has plenty of cricket left and the news about his plans to settle down in the UK came as a surprise for his fans. The source said Amir is eligible for the spouse visa despite spending some time in a juvenile jail for a few months during the spot-fixing scandal in 2010-2011.

“He travels to England regularly and also plays county cricket since last year. So, there are no hurdles for him now.”

Amir announced his retirement from the longest format on Friday having played 36 Tests in his chequered career that saw him being banned for spot-fixing. His decision, however, to didn’t go down well with Pakistani pace stalwarts, Wasim Akram, Waqar Younis and Shoaib Akhtar.

Former captain Rameez Raja too was not impressed by Amir’s decision.

Akram and Akhtar, in particular, hit out at Amir for retiring from Test cricket, noting that Pakistan had invested a lot in him and now was the time for the pacer to pay back to the country.

“I am disappointed and sad at his decision at this time. At 27 years of age he is at his peak and should been available for Pakistan in Test cricket,” Akhtar said.

He said unfortunately the modern day pacers were only interested in playing T20 cricket and even avoided 50-overs cricket. “I fear we might also see others like Hassan Ali and Wahab Riaz follow Amir in quitting Test cricket.”

Akram said he was surprised by Amir’s decision as Test cricket is the pinnacle of the game and a cricketer attains greatness only by proving his worth in the longest format.

Amir’s teammates have also been taken aback by his decision to quit Test cricket. 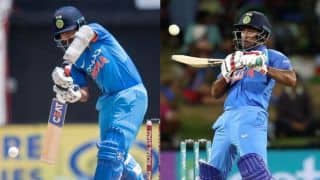