Over the past two seasons, Ashraful scored five List A centuries at an average of 47.83; in 13 first-class games, he has averaged 21.85 with one century

Bangladesh batsman Mohammad Ashraful is looking forward to the upcoming edition of the Bangladesh Premier League to get into reckoning for selection in the national team. Ashraful has recently emerged from a five-year ban from international cricket following misgivings regarding match-fixing and spot-fixing in BPL 2013.

Ashraful had been allowed to play in the domestic first-class competition, National Cricket League (NCL) in 2016. Over the past two seasons, Ashraful scored five List A centuries at an average of 47.83; in 13 first-class games, he has averaged 21.85 with one century.

He is looking forward to participate in the upcoming edition of the BPL. “Playing in the BPL does matter a lot, because it’s a big platform [to prove yourself],” Ashraful told reporters in an interaction recently. “If you get a chance to play there and perform as well, it becomes easier to get into the national team,” he said.

Ashraful, 34, was in 2013 handed a five-year ban for his role in match-fixing and spot-fixing in that year s edition of the Bangladesh Premier League. In September 2014, BCB s disciplinary panel reduced the ban to five years subject to his participation in a BCB or ICC anti-corruption education and training programme. His ban period ended on August 13.

He is raring to represent the national side for the long run through churning out some good performances on the domestic arena. “NCL will be starting soon. I want to play well in domestic cricket. That would be enough I guess,” Ashraful mentioned. “If I had any matches to play now, I would have a chance to perform and earn a spot in the team. But there are no [domestic] games right now,” Ashraful said. 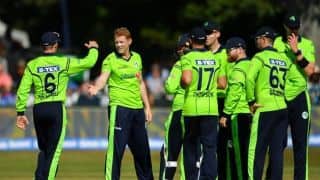 Ireland vs Afghanistan 2018, 1st T20I: Live streaming, where and when to watch cricket score online