Mohammad Ashraful and Mushfiqur Rahim smashed impressive centuries in a record stand as Bangladesh dominated the third day of the opening Test against Sri Lanka in Galle on Sunday. 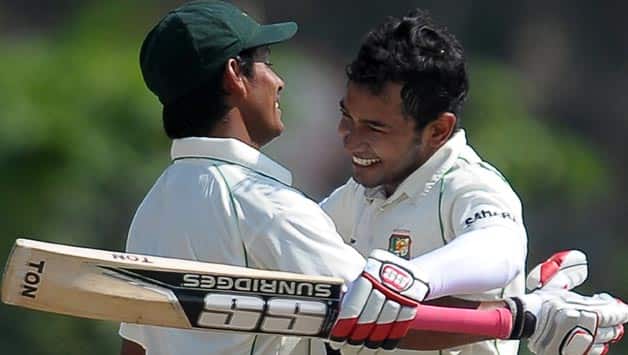 Mohammad Ashraful and Mushfiqur Rahim smashed impressive centuries in a record stand as Bangladesh dominated the third day of the opening Test against Sri Lanka in Galle on Sunday.

Ashraful hit an unbeaten 189 not out, the highest by a Bangladeshi in Tests, on his comeback and Rahim made a career-best 152 not out as the tourists posted 438-4 in their first innings at stumps in reply to Sri Lanka’s 570-4 declared.

Their 261-run unbroken stand was Bangladesh’s highest for any wicket in Tests, the previous best being 200 for the second wicket between Tamim Iqbal and Junaid Siddique against India in Dhaka in 2010.

Bangladesh also surpassed their previous highest total of 413 against Sri Lanka in Tests.

The tourists, who avoided the follow-on in the final session, now trail by 132 runs with six wickets in hand.

It was a frustrating day for Sri Lanka as none of their bowlers could keep up pressure on Ashraful and wicketkeeper-batsman Rahim on a good batting pitch. The hosts went wicketless after striking twice in the opening 11 overs.

Bangladesh added 303 to their overnight total of 135-2 for the loss of just two wickets.

Ashraful, 65 overnight, completed his century with an aggressive shot when he firmly drove unorthodox spinner Ajantha Mendis through the covers for a four in the morning.

Rahim also played some handsome shots during his big innings and reached his hundred in the last session when he swept Mendis for a four.

Debutant Mominul Haque also impressed, scoring an 83-ball 55 with nine fours. He added 105 for the third wicket with Ashraful before being caught at first slip by skipper Angelo Mathews off paceman Nuwan Kulasekara.

The left-hander added 20 runs to his overnight score of 35.

Sri Lanka struck again when left-arm spinner Rangana Herath had Mohammad Mahmudullah stumped for no score to reduce Bangladesh to 177-4 before Ashraful and Rahim propped up the innings.