Bangladesh continued to fight as they reached 330 for the loss of four wickets at Tea in the first Test match at Galle on Sunday. 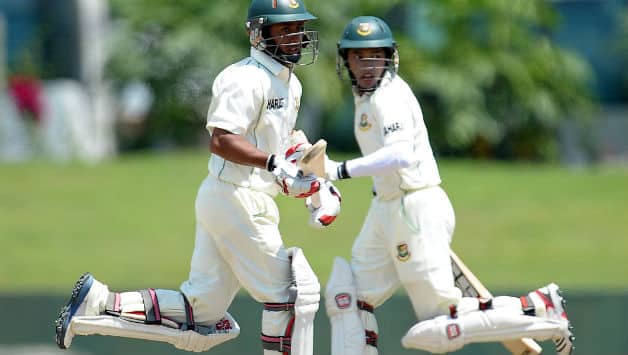 Bangladesh continued to fight as they reached 330 for the loss of four wickets at Tea in the first Test match at Galle on Sunday.

The visitors added 106 runs in the second session of the day without losing a wicket.

Mohammad Ashraful added an unbeaten stand of 153 runs or the fifth wicket with skipper Mushfiqur Rahim.

Earlier, Mohammad Ashraful was unbeaten on 107 at the break with Rahim (25*) at the crease at Lunch. Earlier, Ashraful struck an unbeaten half-century to guide Bangladesh to 135 for two at the end of second day’s play against Sri Lanka at Galle on Saturday. Ashraful forged a stable 70-run partnership with Mominul Haque for the third wicket to rescue the visitors after they were reduced to 65 for two. Bangladesh were in trouble after they lost their opener Jahurul Islam soon after Sri Lanka declared their innings at 570 for four. Islam gloved a beautiful incoming delivery by Shaminda Eranga to the wicketkeeper with the score on 23. Lahiru Thirimanne and Dinesh Chandimal struck their maiden Test tons to propel the hosts to 570 for four. Both were unbeaten when skipper Angelo Mathews declared the innings with a few overs left to play before Tea on Day Two. Brief Scores: Sri Lanka 570 for 4 decl. (Lahiru Thirimanne 155, Kumar Sangakkara 142; Sohang Gazi 3 for 164) lead Bangladesh 224 for 4 (Mohammad Ashraful 107*, Mominul Haque 55; Ajantha Mendis 1 for 46) by 355 runs Full Scorecard Photo Gallery