Disgraced former Bangladesh captain Mohammad Ashraful on Sunday shone with the ball on his return to competitive cricket after three years of suspension for match-fixing charges.

Disgraced former Bangladesh captain Mohammad Ashraful on Sunday shone with the ball on his return to competitive cricket after three years of suspension for match-fixing charges. Playing for Dhaka Metropolis in the National Cricket League, the domestic first-class tournament, Ashraful grabbed 3-49 against Barisal Division on the first day of the four-day match in the southern city of Khulna. This was his second outing in the tournament since the Bangladesh Cricket Board partially lifted his ban on August 13, allowing him to play in selected domestic competitions. Ashraful could neither bat nor bowl in his first match, which saw only 15 overs of action in four days due to rain.

It s a relief that I could get some play finally, Ashraful told AFP by phone from Khulna. The wicket looks really very nice here. So I am now waiting for some batting. Ashraful was initially banned for eight years in 2014 after he tearfully confessed on national television to help fix matches in the scandal-hit Bangladesh Premier League. The Twenty20 tournament was eventually suspended in the wake of the match-fixing scandal before being resumed in 2015 with six new franchises. A local appeal panel in September 2014 cut Ashraful’s ban to five years including a two-year suspended sentence, meaning he could return to competitive cricket from August 2016.

The BCB and the ICC had lodged an appeal to the Court of Arbitration for Sport in Lausanne, Switzerland against his reduced ban in October 2014, but later withdrew it. BCB officials and Ashraful s lawyer had earlier confirmed that the 32-year old former captain would still remain ineligible for the national team and domestic Twenty20 tournaments for two more years. Ashraful, Test cricket’s youngest century-maker, made his debut at the national level at the age of 17.

He has played 61 Tests, 177 one-day internationals and 23 T20 international matches. ICC anti-corruption investigators discovered the fixing scam after being asked by Bangladesh authorities to monitor the lucrative T20 tournament. 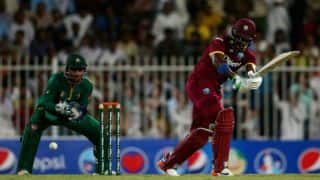