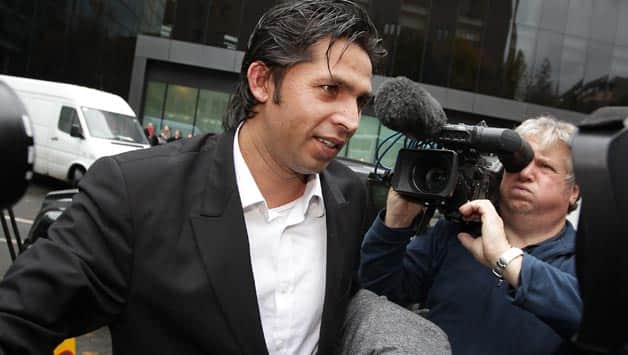 Scandal is nothing new for 30-year-old Mohammad Asif, whose brief five-year international career had more lows than highs © Getty Images

Touted as one of the best new-ball bowlers, Asif’s career appears to have been struck a fatal blow on Wednesday after the Court of Arbitration for Sport (CAS) rejected his appeal against a seven-year spot-fixing ban.

Along with teenage pace partner Mohammad Aamer and captain Salman Butt, he was implicated in a News of the World sting, which claimed that several Pakistani players took money to perform specific orders pre-arranged with bookmakers during the Lord’s Test against England in August 2010.

In 2011 the three players were all banned by the International Cricket Council Tribunal, with Asif and Butt turning to CAS in a last-ditch attempt to get their bans voided.

Scandal is nothing new for 30-year-old Asif, whose brief five-year international career had more lows than highs.

Asif, along with another paceman Shoaib Akhtar, tested positive for a banned steroid in 2006.

He was banned for one year and Akhtar for two years, sanctions which were overturned on appeal, a decision which many felt encouraged Asif to continue flouting the rules.

He again failed a dope test in the inaugural Indian Premier League (IPL) season in 2008 and a two-year ban followed.

Asif suffered more misery when he was arrested at Dubai airport for possessing a banned drug.

He was detained for 19 days only to be deported after the police found the quantity of the substance “insufficient” to pursue a case.

Even after the ban ended, Asif’s career was hit by a scandal with South Asian film star and model Veena Malik, who alleged he owed her huge amounts of money.

And when the spot-fixing scandal broke, Veena called Asif an “eternal fixer”.

For many, Asif’s failure to act responsibly was disappointing.

“Asif has been through a lot in his life, with doping allegations and bans, but he clearly has not learned from his mistakes,” said former captain Ramiz Raja in 2011.

It was under Pakistan’s coach Bob Woolmer that Asif blossomed as a genuine swing bowler.

Woolmer picked him for Pakistan’s tour to Australia and although Asif went wicketless on his debut Test at Perth, Woolmer never lost faith in the lithe and determined fast bowler.

Asif claimed 11 wickets in a tour match against England in 2005 and was brought back into the national side for Pakistan’s final Test against India at home in 2006.

He took seven wickets in the win over India — including the prized wicket of Sachin Tendulkar — at Karachi, which also helped Pakistan clinch the series.

He followed it with 11 victims in Pakistan’s Test win at Galle, taking 17 wickets in the two Tests. His “five-for” also helped Pakistan beat South Africa in the Port Elizabeth Test in 2007.

But an elbow injury and worries over his disciplinary record forced Pakistan to withdraw him and Akhtar from the ICC World Cup 2007.

After he completed the IPL ban, Asif’s career seemed to be back on track until the ill-fated England tour where he grabbed 23 wickets in six Tests — two against Australia and four against the home team.

Brendan Taylor consolidates for Zimbabwe on Day 2 of Harare Test