Azharuddin was initially not allowed to attend the HCA SGM which was convened to pass the Lodha committee recommendations.

Azharuddin was initially not allowed to attend the SGM which was convened to pass the Lodha committee recommendations. On being told that he was not allowed as he was a proxy at the meeting, Azharuddin said he is the vice president of a cricket club. “They kept saying that I have not registered. I am actually the vice president of the National Cricket Club. The letter is there. It is endorsed by the then (HCA) secretary,” he told reporters.

The secretary, who was suspended subsequently, issued the card on January 3. “How I am going to know that he is going to be suspended on the fifth of January. So, I had the card, he gave me this letter when he was in office. So, it is not my fault,” he said.

He said he could have been allowed to attend the meeting as he is an international player. On the charge that he is associated with a cricket association which is not recognised by the BCCI, he said he is not at all involved with the said association. Azharuddin asked how can the SGM be convened for passing the Lodha panel recommendations as it had already been passed.

“How can he adopt Lodha report when it is already registered in the society. How many times you can adopt Lodha committee recommendation I fail to understand,” he said. Azharuddin, who had served a ban over allegations of match-fixing, asserted that he has been recognised by the BCCI.

“I am sure there will be response (from BCCI),” he said. “I think CoA chief Mr Vinod Rai is out of the country. When he comes back, I will definitely meet him,” he said. 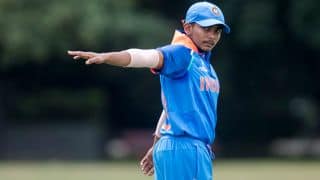