Vice-captain Mohammad Hafeez said Pakistan were focussed on winning the third one-day match at Sharjah Stadium on Monday to take their first series against Australia in ten years. 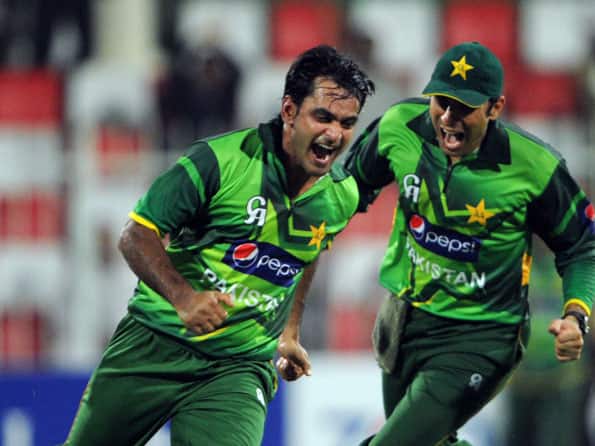 Vice-captain Mohammad Hafeez said Pakistan were focussed on winning the third one-day match at Sharjah Stadium on Monday to take their first series against Australia in ten years.

Pakistan and Australia go into the third and final one-day at 1-1, with Australia winning the first match here by four wickets before their rivals earned a series-levelling seven wicket win in the second at Abu Dhabi on Friday.

Hafeez said records did not matter as Pakistan always go for a win.

“We, as a team, think about winning every game but if in the process we are able to achieve a record then it’s fine,” said Hafeez of Pakistan’s prospects of winning their first one-day series against Australia since 2002.

“We want to take the winning momentum of the second match into the third and our varied bowling attack gives us an edge ovr Australia,” said Hafeez, himself part of the spin trio led by Saeed Ajmal.

Left-arm spinner Abdur Rehman replaced Shahid Afridi in the second match after the leg-spinner had a recurrence of a back problem. Afridi was a doubtful starter for Monday.

Ajmal took three wickets in the first match and four in the second, exposing Australia’s weakness against spin.

Hafeez refused to admit that it will be a win toss, win match situation after Pakistan benefitted from Australia’s decision of batting first in Abu Dhabi.

“They were wet conditions in Abu Dhabi but they are the same for both the teams and I don’t think the toss will be decisive,” said Hafeez.

Australian allrounder David Hussey admitted Ajmal has been a threat.

“He (Ajmal) is a hell of a great bowler. It is totally different from the way Australians play him, you might see a different technique against him in the third game,” said Hussey.

“All their bowlers warrant lots of attention. We do our planning very deligently and when it comes to planning and Hafeez definitely does not slip under the radar and he is number one ranked spinner in the world at the moment.”

Apart from the Pakistani spinners, Australia were smarting from the oppressive heat in the United Arab Emirates.

Australia were hopeful their openers Matthew Wade and David Warner fire after failing to score big in the first two matches.

Paceman Mitchell Starc was a doubtful starter after complaining of chest pain on Friday. (AFP)